The week of March 16-22 takes us from Lunar Day 23 to Day 28. This week we will highlight the Hippalus rilles, viewable around 5:00 a.m. on Wednesday morning. 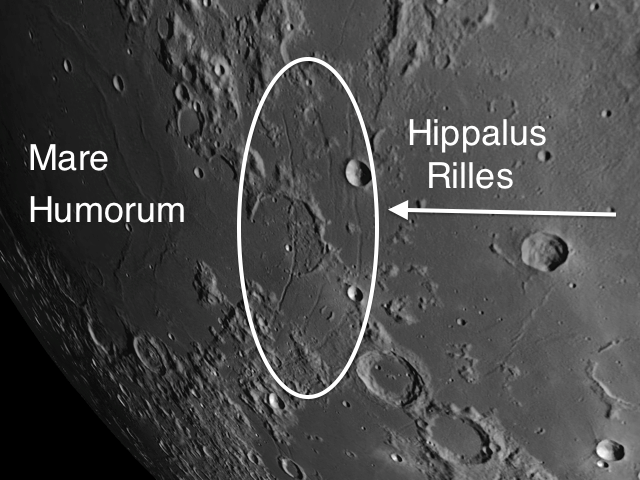 Rimae Hippalus: [SW/M6] On the east shore of Mare Humorum you will find the remnant of the crater Hippalus, whose southwest rim, because of subsidence, has disappeared into the mare. The area around Hippalus contains the finest examples of arcuate rilles to be found on the Moon. Each one is about 2 miles wide. (Catch these rilles when the terminator is around 32° west.) Notice how some of the rilles plough through mountain ridges and craters, and some are interrupted completely by small craters but continue on the other side. One prominent rille cuts straight through the middle of Hippalus. This gives you a clear indication of the sequence of activity. What features were in place before Humorum filled with lava and subsided? What features appeared after subsidence took place?

OF ADDITIONAL INTEREST ABOUT THE MOON:
Check out this lovely poem about the Moon by Walter de la Mere:

Slowly silently, now the moon
Walks the night in her silvery shoon1;
This way and that, she peers and sees
Silver fruit upon silver trees;
One by one the casements catch
Her beams beneath the silvery thatch;
Couched in his kennel, like a log,
With paws of Silver sleeps the dog;
From their shadowy cote2 the white breasts peep
Of doves in a silver-feathered sleep;
A harvest mouse goes scampering by,
With silver claws and a silver eye;
And moveless fish in the water gleam,
By silver reeds in a silver stream.

The spring equinox (aka vernal equinox) will occur this week on Thursday, March 19. This is a time when the Sun, which has been moving steadily northward since the winter solstice, crosses the celestial equator, and night and day are of equal length (hence the term equinox, “equal night”) and spring begins.

There is a persistent belief that resurfaces once a year that on the vernal equinox it is possible to stand an egg on end. There is a good chance that you will see some news media reporting this and will even visit science classes in schools where students put this to the test. To everyone’s astonishment, some students are successful, thus proving that once a year mysterious forces come into play that are not completely understood.

However, if the news media were to revisit the same class a week or a month later they would discover roughly the same percentage of students would again be successful at standing an egg on its end. (This never happens because the strict rule is that the event must transpire on March 20 and it never occurs to anybody to test it out on a later date.) The simple explanation is that the end of an egg has tiny bumps on it and with persistence a student will find three bumps that will serve as a type of mini-tripod that will hold the egg steady on its end.