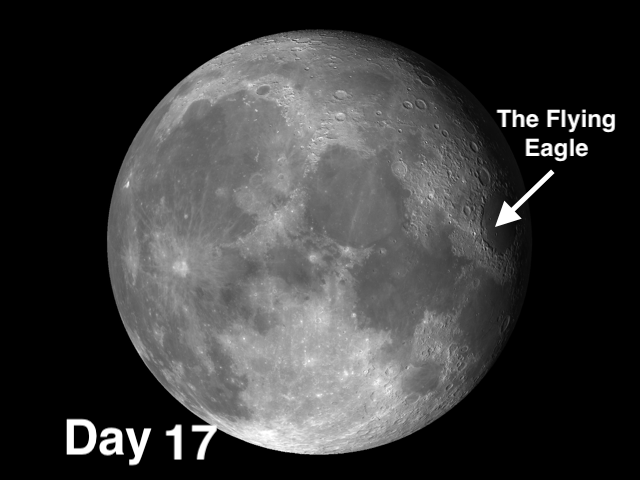 The week of March 9-15 takes us from Lunar Day 15, full moon, to day 22. This week we will highlight a feature informally known as “the Flying Eagle,” viewable on Wednesday night and early Thursday morning.

The Flying Eagle: [NE/H15] As the lava cooled following the impact that created Mare Crisium, a series of wrinkle ridges, known as Dorsum Oppel, formed along the entire western edge of Crisium and give the impression of waves lapping on the shore. The flowing lava partially filled the pre-existing craters Yerkes and Lick [H15], turning them into ghost craters. There is also a more substantial ridge that connects the flooded crater Yerkes with the smaller Yerkes E, 15 miles to its northwest (unnamed on the Field Map). Under a low Sun (when the terminator is around 52° – 55°) this ridge looks remarkably like the silhouette of a bird in flight and has been nicknamed the Flying Eagle.

Every full moon has a special name, and the one in March is called “The Worm Moon” because in the beginning of March, the ground begins to soften, roots begin to push their way through the dirt, the soil loosens up and earthworms start to reappear (thus attracting “the first robins of spring.”)

The Flying Eagle on the Moon
Tagged on: lunar dates    lunar days    objects on the moon