The week of July 25th – July 31st takes us from lunar Day 21 through Day 27. On Monday the Moon doesn’t rise until about midnight, so this week’s Moon observers must be night owls. The next few days are a magnificent time to view the Moon as the terminator splits it in half on Tuesday and all of the craters, mountains, and valleys are set off with astonishing detail! This week we will highlight Rima Hyginus, the Hyginus rille. 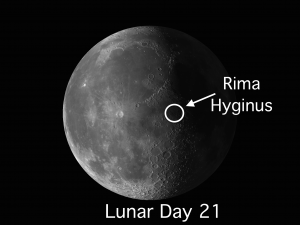 Rima Hyginus: [NE/J10] On Monday, just below and a little to the right of Mare Vaporum, you will find Rima Hyginus emerging from the shadows of the terminator until it encounters the small 6-mile crater Hyginus. At that precise point it changes direction and veers northward toward Vaporum. The fact that Hyginus crater is located precisely at the pivot point is a curiosity. Can this just be coincidence? 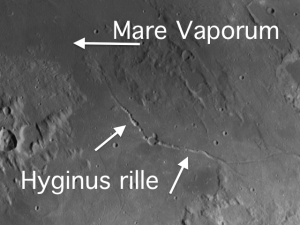 Rima Hyginus is 2.5 miles wide and is easily seen in very small telescopes. It is really made up of a line of linked craters which are best seen just northwest of the crater Hyginus. With good optics and steady seeing you might be able to make some of these out even with a three-inch scope. It has been suggested that these are actually rimless collapse pits of internal origin and that the crater Hyginus (also rimless) might be one of their number. Can you see any of the individual craters, or does Rima Hyginus just look like a linear feature?

OF ADDITIONAL INTEREST IN SPACE THE WEEK OF JULY 25-31:

Why are almost all craters round when obviously many of them were produced by asteroids and comets coming in at a low angle?

When an asteroid hits, it causes an explosion like a bomb. Because the energy released is so immense compared to the size of the impactor, the angle of its approach is of no consequence and usually will not elongate the shape of the resulting crater. Only if an asteroid arrived at an extremely low angle would the crater start to become oblong. The asteroid that blew out the crater Tycho came in at a very low angle (as evidenced by the surrounding butterfly pattern), but because it released an amount of energy equal to a mind-boggling 30 trillion tons of TNT the crater is perfectly round!

Rima Hyginus Moon Crater: July 25-31 – Craters, Mountains, and Valleys Are Set off With Astonishing Detail
Tagged on: lunar dates    objects on the moon

One thought on “Rima Hyginus Moon Crater: July 25-31 – Craters, Mountains, and Valleys Are Set off With Astonishing Detail”