The week of August 8th -14th takes us from Day 6 through Day 11. Monday through Tuesday are the most spectacular days to observe the Moon and are the best days to show off the Moon at Star Parties. This week we will feature the crater Julius Caesar. 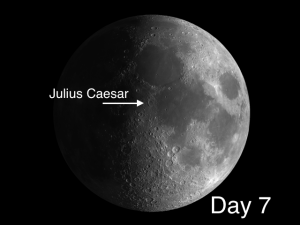 Julius Caesar: On Tuesday locate the partially ruined crater Julius Caesar (Field Map of the Moon grid NE/J11) near the western shore of Tranquillitatis. The floor of this crater is unusual in that it gradually darkens as you go north until it becomes one of the darkest areas on the surface of the Moon. The lighter-hued portion of the floor (and of the surrounding area) is believed to be composed of material that was blown out of the Imbrium basin 3.9 billion years ago. Search this region to look for features that are radial to Mare Imbrium. They are further evidence of sculpting that resulted from the creation of the Imbrium basin when an asteroid 60 miles in diameter slammed into the Moon at 10 miles per second and blasted out a 720-mile-wide crater! It must have been a magnificent wallop! 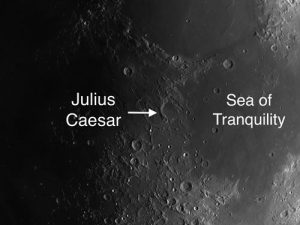 OF ADDITIONAL INTEREST ON LUNAR DAYS 6-11:

On Thursday the Moon, Saturn and Mars will be in a fairly tight triangle in Scorpius. Mars will still be a very bright magnitude -0.6 (brighter than Saturn) and 12 arc-seconds in diameter. (One year from now Mars will have an apparent diameter of only 3.5 arc-seconds.) Mars is also only 6° west of Antares, so it’s a good time to compare the two. Antares (Greek for “the rival of Mars”) was so named because due to its red color it was frequently mistaken for Mars. The magnificent globular cluster M4 (visible in binoculars) is only about 1° west of Antares, so it’s a very rich field to play in.

Also on Thursday the Perseid meteor shower peaks late at night. Happily, the Moon will set around 1:00 AM and will be out of the sky during the prime meteor watching hours. Normally you can expect to see around 60 meteors per hour, but this year scientists are predicting a heavier than normal shower because Jupiter perturbed the meteor stream some 16 months ago.

Lunar Day 6 & 7: Best Days to Show Off the Moon at Star Parties
Tagged on: lunar dates    objects on the moon