The week of July 18th – July 24th takes us from the end of lunar Day 14 to the beginning of Day 20. Monday and Tuesday are virtually full moons, and there is very little contrast to set off the craters and mountains. This week we will highlight the crater Janssen, visible on Friday night. 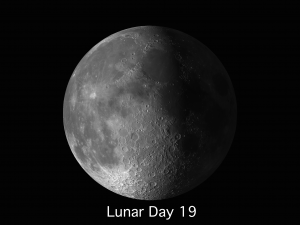 Janssen: [SE/P13] Janssen is located 85 miles southwest of the Rheita Valley (which was prominent last night). Janssen’s diameter is a robust 120 miles (Copernicus, the “Queen” of all craters, is a “mere” 58 miles in diameter!). Janssen is a textbook example of how new craters are superimposed on top of older craters and, at the same time, are smaller than the older craters that underlie them. 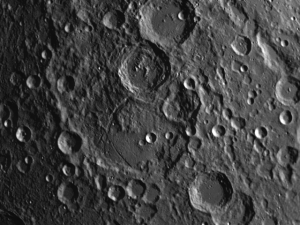 Although Janssen is very old and its walls are in ruins, you should pay it a visit. When the Sun is low, it’s rather like visiting the ruins of an old castle; it’s still full of artifacts and reminders of a bygone age. The remains of the walls are still visible and there are mountains, rilles, and well-defined craters on its interior. The largest intruder is the crater Fabricius (48 mi.) that occupies the northern portion of the floor. The most impressive rille, Rima Janssen, is visible through very small telescopes. It appears to be a graben that curves conspicuously from the southwest wall of Janssen and attaches to the south wall of Fabricius. It is unusual in that it is a highland rille. Janssen is a rewarding field to play in. Revisit it often!

OF ADDITIONAL INTEREST FROM LUNAR DAY 14 TO 20:

The constellation Scorpius has many fascinating objects for both binoculars and telescopes–the globular cluster M4, red Antares (its name means “the rival of Mars” because people often confuse it with the red planet—see nearby Mars for a comparison), the double star Mu Scorpii (the 3rd star down from Antares). If you have very good eyesight try to split Mu Scorpii with your naked eyes, then double-check it with binoculars.

Janssen Lunar Moon Crater: Example of How New Craters are Superimposed on Top of Older Craters
Tagged on: lunar dates    objects on the moon