The week of August 6-12 takes us from Day 23 to the end of Day 1. The only decent views of the Moon will be Tuesday and Wednesday morning before sunrise. This week we will highlight the de Gasparis rilles and the Marius Hills. 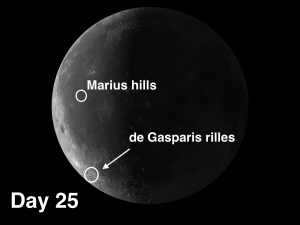 de Gasparis rilles: [SW/M4] The crater de Gasparis, just to the west of Mare Humorum, is a hub of rille activity. With no fewer than nine rilles converging on or near it, de Gasparis, like Triesnecker [Day 6], looks like a railway switchyard. Add to this the Mersenius rilles just to the northeast and we have a very busy neighborhood indeed. 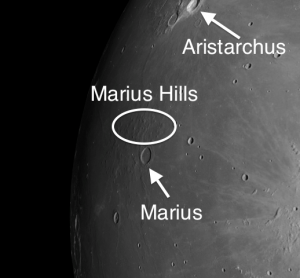 Marius Hills: [NW/H4] Immediately north and west of the crater Marius is the largest dome field on the Moon. Because domes are such low features, you must observe them when the terminator is close. The Marius Hills are a combination of low domes, around 1,000 feet high, and steeper volcanoes with genuine cones that go up to 3,000 feet. There are over 300 such formations in this area!

In the center of a circular depression, one crater-diameter south of Marius, there is a single unnamed dome with a summit pit. Because it is 6 miles in diameter, it is curious that it remains unnamed. See if you can make it out. (There is a clear drawing of it in Rükl’s Atlas, chart #29.)

OF ADDITIONAL INTEREST IN SPACE – MARS

It’s only a week after Mars had its opposition on July 26th when it was opposite the Sun and high in the sky. This is an especially good opposition because Mars hasn’t been this big and bright since 2003. This week, Mars will still be a very bright magnitude -2.7 with an apparent size of 24.1 arc-seconds. Adding to your viewing interest is the fact that a huge lake of water has recently been discovered under the southern ice cap, greatly increasing the possibilities of extra-terrestrial life (albeit microbial) within our solar system!

Latest posts by Andrew Planck (see all)
de Gasparis Rilles: A Hub of Rille Activity and Marius Hills: The Largest Dome Field
Tagged on: domes on the moon    lunar dates    lunar days    objects on the moon