The week of August 13-19 takes us from Day 3 to the end of Day 8. This week we will highlight the Altai Scarp, viewable Friday evening (possibly Thursday) and the crater Hipparchus, viewable on Saturday evening. 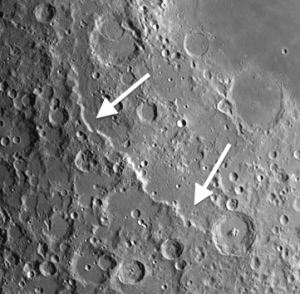 Altai Scarp (Rupes Altai): [SE/M12] Viewable even through small telescopes, the Altai Scarp is a spectacular example of how shock waves from a major impact can compress the surrounding terrain into a series of outwardly expanding rings. Nearly 3.9 billion years ago a large asteroid or comet slammed into the Moon and dug out the Nectaris Basin. Shock waves rapidly expanded through the surrounding terrain and became frozen in place, producing a classic multi-ring basin. Rupes Altai is a beautiful and conspicuous fragment of the original rings. In truth, it is the remains of a circular mountain range whose highest peaks rise to 13,000 feet! But you must catch the scarp under an early morning Sun, it’s majesty fades quickly. View it around Day 5 or 6 when the face of the scarp is fully illuminated, then revisit the area on Days 19 or 20 at lunar sunset. At this time the scarp sends long shadows over the terrain to the east. Which day shows the scarp to its best advantage?

As daylight moves across the region, try to locate hints of other ring features surrounding Mare Nectaris.

Hipparchus:1 [SE/K10–viewable Saturday evening] a large, degraded crater. Look for evidence of Imbrium sculpting on its walls and in the environs.

OF ADDITIONAL INTEREST IN SPACE THE WEEK OF AUGUST 13:

The Perseid meteor shower will peak early Monday morning, but there still should be plenty of activity on Tuesday as the Perseids have a very large window. The best times are in the early morning hours. The Perseids will produce 60-70 meteors per hour, with several fireballs, and there will be no interference from the Moon.

1Hipparchus: (c. 190-125 BCE) Greek astronomer who discovered the precession of the equinoxes and was the founder of trigonometry. He also established the magnitude system which we use today by which stars were classified by their brightness (magnitude 1 being the brightest and magnitude 6 being the dimmest). Hipparchus is also credited with having invented the astrolabe, and he calculated the mean lunar month to within one second of today’s accepted value!

Latest posts by Andrew Planck (see all)
Shock Waves Frozen in Place on the Moon and A Large, Degraded Crater
Tagged on: complex craters on the moon    lunar dates    lunar days    objects on the moon    Perseid meteor shower    shock waves