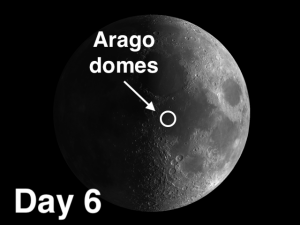 The week of October 23-29 takes us from Day 4 to Day 9 spanning the 1st quarter Moon, the ideal time for lunar observing! This week we will highlight the Arago domes. On October 11th in the early morning, we viewed the crater Arago. This Wednesday evening we can visit the nearby Arago domes (at a much more reasonable hour!).

Domes are low rounded structures found in mare areas where rising magma has pushed upward and caused the lunar surface to bulge out in blister-like swellings. Sometimes the underlying pressure was not enough to cause the magma to break through, at other times the domes erupted into small, gently sloping shield volcanoes, and their summit pits can actually be seen under low-angle lighting (such as we will have Wednesday evening) and good seeing conditions.

Lunar domes are not attention grabbers like the more spectacular craters and mountain ranges, so they are easily overlooked, but they are fascinating objects and well worth the effort to seek them out. Because the endogenic theory of crater formation1 has now largely been disproven, it’s fun to hunt down evidence that there really was volcanic activity on the Moon. You will need at least six inches of aperture and 150 – 300 power. (Examples of lunar domes: Cauchy w (omega) and Cauchy t (tau) [Day 4; NE/J13], Arago Domes [Day 5; NE/J12), Kies p [Day 9; NW/M7], Hortensius Domes [Day 10; NW/J7], Milichius p (pi) [Day 10; NW/H6].

On October 11th in the early morning, we viewed the crater Arago. This Wednesday evening we can visit the nearby Arago domes (at a much more reasonable hour!). 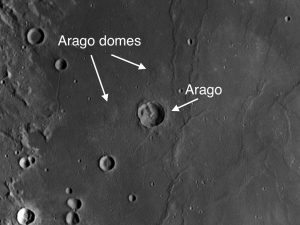 Arago domes: [NE/J12] Near the crater Arago there is a pair of very large domes, one to its north (Arago a [Alpha]) and one to its west (Arago b [Beta]). These are two of the largest and most prominent domes on the Moon, and halfway between Arago a and the crater Maclear (100 miles to its northeast) you will find a challenging group of four smaller domes. It will be a nice victory for you if you manage to spot them.

Arago Crater and Arago Domes on the Moon: Evidence of Volcanic Activity
Tagged on: lunar dates    lunar days    objects on the moon    volcanic activity on the moon