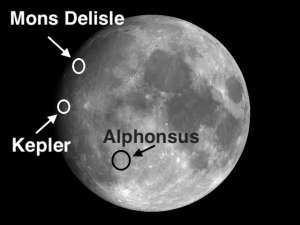 The week of October 30-November 5 takes us from Day 10 to the end of Day 16. This week we will highlight Mons Delisle and the crater Kepler, viewable on Monday evening. (These objects were covered in an earlier blog, but they were viewable only in the early morning hours. They’ll get more customers this week.)

Mons Delisle: [NW/G6] The over-imaginative among us say that if you catch it in the right light this curved mountain range, located just southwest of Delisle crater, resembles a baby with an oversized head, two outstretched arms, and trailing legs. The baby is speedily crawling southward not far from a nearby unnamed mountain group to its northwest which has informally been named “the Skull.” Your creative challenge for the evening is to see if you can turn the above named features into a baby and a skull.

Kepler: [NW/J6] Kepler is a substantial 20-mile crater with terraced walls and some disappointingly feeble hills in place of a central mountain peak. There is a peculiar straight gash just in from the east rim which forms a long straight valley. Revisit Kepler at full Moon to appreciate how its rays intertwine with those of Copernicus and Aristarchus. 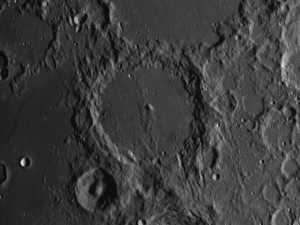 OF ADDITIONAL INTEREST IN SPACE FROM OCTOBER 30 – NOVEMBER 5:

Scientists at Brown University say water is widespread on the Moon. It is found in numerous pyroclastic deposits across the lunar surface. The dark halos that you can clearly see in the interior of the crater Alphonsus are made up of these pyroclastic deposits. As magma is spewing out from volcanic vents, sometimes gases that are trapped within will suddenly expand and cause the molten rocks to explode in a shower of tiny dark glass beads. The result is that the area surrounding the source vent is covered by these dark halos. The Aristarchus Plateau [NW/G5-6] is covered by pyroclastic ash 30 to 100 feet deep!

Spot “the Skull” and “Gash” on the Moon
Tagged on: lunar dates    lunar days    objects on the moon