The week of September 11-17 takes us from Day 21 to Day 27. The Moon will not be in a good position for viewing until about 1:00 AM on Tuesday. This week we will highlight the Triesnecker rilles, visible early Tuesday morning.

Rimae Triesnecker: [NE/J10] What a great place to poke around with your telescope! This is such a complex system of rilles that it looks like a railway switchyard! Before looking at the footnote, which do you think came first, the crater or the rilles? 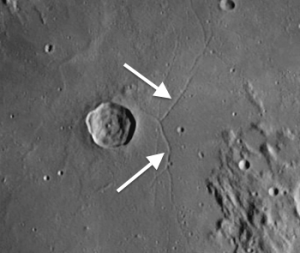 Scientists are not sure how the Triesnecker rilles developed. Their origin still remains a mystery, but the consensus is they are not grabens (as the Ariadaeus rille is [NE/J11]). Enjoy them as one of the Moon’s many enigmas.

WHAT’S HOT ON THE MOON TONIGHT THE WEEK OF SEPTEMBER 11-17:

On Tuesday morning, just on the edge between nautical and civil twilight, the Moon will occult Aldebaran and will be visible before or during dawn in the west.

1 There is a rille approaching Triesnecker’s northeast rim that looks like it has been interrupted by the crater, suggesting that the rilles were there first.

2 graben: [German for ditch] an elongated depression between two parallel fault lines. These lines occasionally pull apart with such force that the ground between them drops. Rima Ariadaeus [Visible Monday morning & on Day 6; NE/J11] and the Alpine Valley [Visible tonight & Day 7; NE/E10] are excellent examples of grabens. Lunar grabens have their counterparts on Earth. Examples are Death Valley, parts of the Rhine Valley, and the Rift Valley in Africa.

Triesnecker Rilles on the Moon: Looks Like a Railway Switchyard
Tagged on: lunar dates    lunar days    objects on the moon