The week of September 4-10 takes us from the end of Day 13 through Day 19. This week we will highlight the crater Riccioli, visible on Monday night, and discuss libration. 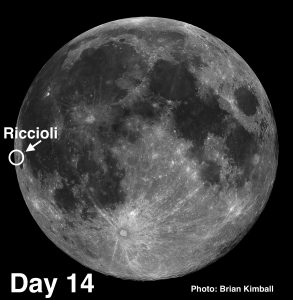 Riccioli: [NW/K2] Because this crater is close to the western limb of the Moon, it’s best observed during a favorable libration (which will be the case on Monday – see below for a discussion on libration). Riccioli is discussed here primarily because of its historical significance. However, ejecta from the magnificent Orientale basin (located just around the southwest limb of the Moon in the L-M libration zone on your Field Map) landed in Riccioli and you can see some of the dark covering of lava that resurfaced Riccioli’s floor in the northern half of its interior.

Giovanni Battista Riccioli (1598-1671) was an Italian Jesuit priest and astronomer who created a system of nomenclature for lunar features that is still in use today. Riccioli was also the first person to discover a binary star, Mizar in Ursa Major1. It is perhaps indicative of his own sense of self-importance that the crater Riccioli, which he named after himself, is larger than the magnificent craters Copernicus2, Kepler, and Tycho.

Libration: Because of something called locked rotation, the Moon always keeps the same face pointed towards the Earth. As a result, we never see the far side of the Moon (sometimes incorrectly called “the dark side.”)3 However, although at any one time we can only see 50% of the Moon’s surface, we actually are able to see 59% of the Moon because of a phenomenon called libration, the apparent back-and-forth wobble of the Moon that can be observed from month to month, even by the naked eye. The term comes from a Latin word meaning “a rocking movement” around a point of balance. (Notice the etymological connection with the constellation Libra, “the Scales,” a device that weighs things by rocking back and forth.) There are three types of libration: in latitude, in longitude, and diurnal. Contrary to popular belief, the Moon does not actually rock back and forth. All of these movements are an illusion.

Libration in latitude is caused by the fact that the Moon is tilted on its axis by about 6½°. This means that as the Moon travels around the Earth, at one point we can see a little over the top of the Moon’s north pole, and two weeks later we can see a little underneath the south pole. Notice that the Moon itself has not actually tilted, we’ve merely waited two weeks for the Moon to move to the other side of the Earth, allowing us to see a little bit underneath its south pole.

Libration in longitude is a result of the Moon’s orbit being an ellipse. Because the Moon dutifully obeys Kepler’s Three Laws of Planetary Motion, at perigee (its closest point to the Earth) it travels around the Earth more quickly, and at apogee (its farthest point) its orbital speed slows down. However, as it approaches these two points, the Moon’s speed of rotation on its axis remains constant; only its speed of revolution around the Earth changes.

Think of the Moon as a tennis ball that you’ve just bounced against the floor in slow motion and that has a slow, steady spin on its axis. At its highest point (apogee) it actually comes to a stop before returning towards the Earth. However, while it’s hanging in space, the ball (i.e., the Moon) continues to spin slowly on its axis at the same speed, thereby allowing you to peek a little farther around its western “edge.” Now when the Moon zooms past the Earth at perigee at a faster clip, because its speed of rotation remains constant, we can now see farther around its eastern limb.

Diurnal libration (meaning it occurs every day) is an extension of libration in longitude and happens because as the Earth spins on its axis, you (the observer standing on the Earth’s surface) are actually carried through space several thousand miles between the times of moonrise and moonset. This means that at moonrise, because of your perspective, you are able to see a little bit around the right “edge” of the Moon, and at moonset the Earth has carried you to a new vantage point up to 8,000 miles away from where you started. You can now see around its other edge, thus allowing the Moon to appear as if it had just wobbled its face a bit left and right. The amount of diurnal libration can be up to three degrees. Again, the Moon has not physically wobbled its face from left to right.

Think of yourself on a merry-go-round (the Earth) with a friend (the Moon) standing motionless on the ground staring fixedly at the center of the merry-go-round. As you approach him, you take a picture of his face showing his left ear. As you go away from him, you take another picture of his face showing his right ear. When you compare the two pictures, if you didn’t know better, you could convince yourself that he actually wobbled his head from left to right, but in reality he was standing motionless.

For an excellent visual demonstration of the effects of libration, go to the following website:
http://en.wikipedia.org/wiki/File:Lunar_libration_with_phase_Oct_2007.gif then click on the image of the Moon to start the demonstration.

1 Alcor and Mizar have also been recently proven to be a true binary, not just an optical double star, as was believed up until just a few years ago.

2 When Riccioli gave the crater Copernicus its name, he actually intended it as an insult. Being a dedicated supporter of Church doctrine, Riccioli believed that Copernicus’s theory that the Sun was at the center of planetary revolution was, well, revolutionary–and disruptive to Church stability. As a result, he deliberately placed Copernicus near areas of the Moon that were named after storms, tempests, and similarly unpleasant things. In Riccioli’s own words, he “flung Copernicus into the Ocean of Storms.” However, the idea backfired. Copernicus is one of the most fetching of all craters, and every time astronomers turn their telescopes on this feature, they are paying tribute to the great man.

3 The Moon does have a dark side, of course. It is the side facing away from the Sun as the Moon spins on its axis once a month. As a result, the “dark side” is constantly changing.