The week of September 3-9 takes us from Day 23 to Day 0 (New Moon). This week we will highlight the Capuanus lunar domes and the Kies Π (Pi) dome, viewable early Tuesday morning. 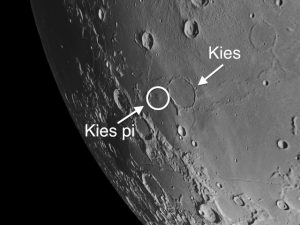 Kies Π (Pi): [SW/M7] Sandwiched in between Bullialdus and Rima Hesiodus (which you observed on August 20) you will find one of the Moon’s best examples of a lunar dome, Kies Π. Being located below the conspicuous crater Bullialdus and just west of the flooded crater Kies, it is one of the easiest domes to find. It is 7 miles in diameter, but because it is only 500 feet high you must catch it under a very low Sun (which will be the case early Tuesday morning). With luck, good optics, and a steady atmosphere you might be able to make out the 0.8 mile summit pit at the top. Most lunar domes occur in groups, so Kies Π is something of an oddity. 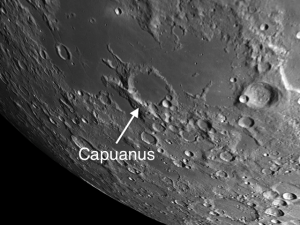 Capuanus: [SW/N7] South of Kies Π, just off the south shore of Palus Epidemiarum, is the lava-filled crater Capuanus that displays several low domes on its surface. They should be easy objects for an eight-inch telescope. Domes are not usually found within craters, so this is also an oddity.

Latest posts by Andrew Planck (see all)
The Moon’s Best Examples of a Lunar Dome
Tagged on: domes on the moon    lunar dates    lunar days    objects on the moon