The week of March 2-8 takes us from Lunar Day 7 to Day 14, This week we will highlight the lunar fault Straight Wall, visible on Days 7 & 8. 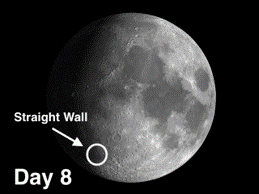 Straight Wall: (Rupes Recta): [SW/M9] Two of the best-known faults on the Moon are Rupes Recta and Rupes Cauchy [Day 4]. They are fascinating to explore and they share remarkably similar neighborhoods: Both features are paralleled by a nearby rille, and in each case, an intervening small crater separates the rille and the fault.

Straight Wall is the showpiece lunar fault line and can be seen clearly in the smallest telescopes. It is 70 miles long and 1,300 feet high. If you view it either in the early morning on Day 7, or at lunar sunset around Day 22, you will see clear evidence that Straight Wall is an enormous fault line where the terrain to its west has fallen away. In the morning, the rising sun casts a thick black shadow over the lava plain to the west. At sunset two weeks later, the exposed slope of the fault is brightly illuminated.

OF ADDITIONAL INTEREST IN SPACE:
Not a favorite event for astronomers: daylight savings begins on Sunday, March 8.

Here’s an interesting project to do for your child:
I covered my grandson’s bedroom ceiling with glow-in-the-dark constellations. I got push-pins from Amazon, both in the shape of stars1 and little globes 2. I painted them with phosphorescent paint3 and connected them together in their constellations with glow-in-the-dark string that I found on Amazon4. It worked better than I thought and my grandson can now go to sleep gazing up at the night sky. (See below photo for the constellation Pegasus, the flying horse (it’s upside down in the sky, but looks more-or-less like a horse). If you’re not completely secure with the constellation names, you can get a label maker from Amazon and use non-phosphorescent push pins to attach them, then learn them during the day or when you have the lights on. 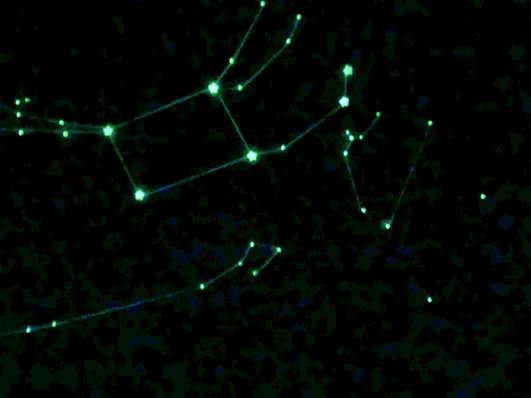 1 Go to Amazon and search for Clear Star Push Pins

4 Search for “Glow In The Dark Micro Cord”