The week of November 14-20 takes us from Lunar Day 15 through Day 21, immediately following Full Moon. This week we will highlight Monday’s “SuperMoon” and Rima Ariadaeus, one of the best rilles on the Moon, viewable on Saturday.1 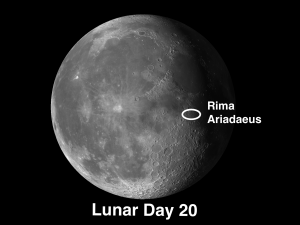 On Monday there will be the largest “SuperMoon” in nearly 70 years. It will be 30% brighter and appear 14% larger than normal full Moons. Because the orbit of the Moon is elliptical (one of Kepler’s greatest discoveries), the Full Moon won’t coincide with this close an approach to the Earth again until 2034. Technically, Full Moon occurs on Sunday at 7:06 PM EST, but the difference in the Moon’s distance between Sunday and Monday is so subtle that one night is as good as another.2

Take out a lawn chair, some music, and a bottle of wine. Find a clear view of the eastern horizon and be in place while the Moon is rising, rather than later when it might be technically closer to the earth but will appear smaller. When the Moon just clears the horizon, the standard illusion that the Moon is bigger will be combined with the fact that it really is bigger–a double whammy that is a captivating sight! 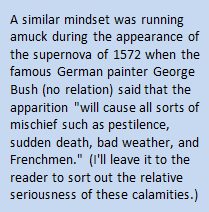 Monday’s extreme SuperMoon is something that happens comparatively rarely, and for a few days preceding such an event, the terminally gullible will be coming out of the woodwork predicting earthquakes, volcanoes, hurricanes, plagues, and kindred harbingers of Armageddon. So get your front row seat, and don’t miss the excitement!

Rima Ariadaeus: [NE/J11] The best place to see rilles on the Moon is in the area just west of Tranquillity. Here you will find a remarkably varied collection–to wit, Ariadaeus, Hyginus (two of the best-known rilles on the Moon) and Triesnecker. Tonight, we’ll cover Rima Ariadaeus. (The other two can be seen well tomorrow night.)

When the terminator is close, Rima Ariadaeus is an enjoyable target even for small telescopes. It is a classic example of a graben, an elongated depression between two parallel fault lines where the ground in between has fallen away. If you have at least a 4″ telescope with good optics and steady seeing, you will just be able to make out that the fault lines have pulled apart and the ground in between has sunk. (This is a challenge; Ariadaeus is a shade over two arc-seconds wide.) The rille appears to be broken in a few places, indicating that the lunar terrain has shifted since it was created, and there is a shunt on its western end connecting it to Rima Hyginus.

OF ADDITIONAL INTEREST FROM LUNAR DAY 15 THROUGH DAY 21:

Early Sunday morning around 1:30 AM EST, the Moon will be just 6° 50’ from the Beehive Cluster in Cancer. If you have wide angle binoculars, you can catch both the Moon and the Beehive in the same field of view.

1 The word rille comes from a German word meaning groove (Latin form: rima) and describes any of various long narrow depressions that resemble a channel or valley.

2 Only 653 miles, which amounts to 0.1 arc-minutes in the apparent size of the Moon, a totally invisible difference to the naked eye.

Latest posts by Andrew Planck (see all)
#SuperMoon and #RimaAriadaeus, One of the Best Rilles on the Moon
Tagged on: lunar dates    lunar days    objects on the moon    super moon