The week of Nov. 7 – 13 takes us from Lunar Day 7 to Day 14. This week we will highlight the trio of craters Ptolemaeus, Alphonsus, and Arzachel just north-east of Mare Nubium. 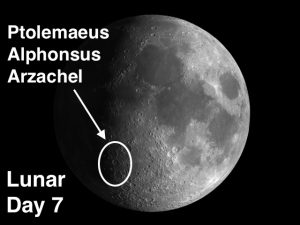 • Ptolemaeus, Alphonsus, Arzachel: This is the second group of favorite show-stopping trios on the Moon (the first being Theophilus, Cyrillus, and Catharina which you may have seen on Day 5). Both trios will richly reward close examination. Debris from the Imbrium impact has carved long valleys into the area immediately surrounding these craters. Examine the neighborhood when the terminator is close. (Don’t overlook the opportunity to revisit around Day 22 when the Sun is setting over these features.) 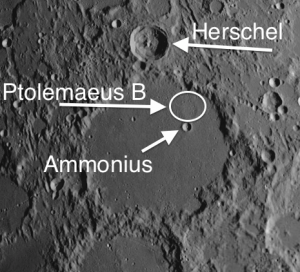 • Ptolemaeus: [SW/K9; L=2] At 95 miles in diameter, Ptolemaeus is so large that Copernicus, “the Monarch of the Moon” would easily fit inside its walls with room to spare. It has a relatively smooth floor. Charles Wood suggests that material thrown out from the Imbrium impact landed inside Ptolemaeus, and because this debris was still in a molten state, it spread out and ponded within the crater walls. By rights, Ptolemaeus should have an impressive central mountain complex (compare the much smaller Herschel immediately to its north) so the “ponding” was pretty substantial.

Ptolemaeus departs somewhat from the standard circularity of craters. With only a slight twist of the imagination, it can be made to look like a perfect hexagon with more-or-less straight sides. Catch it under an early morning Sun and you will be able to see the ghost images of several subsurface craters trying to percolate through to the top. They resemble very shallow saucers. The most obvious of these, Ptolemaeus B, just touches the north rim of the 6-mile crater Ptolemaeus A (aka Ammonius) located in the northeast quadrant of Ptolemaeus. There are also several craterlets from 0.5 to 3 miles that will test your optics and the seeing conditions. Try to make out the unnamed crater chain extending between the northeast rim and the 12-mile crater Müller. This crater chain (or catena) is not radial to Mare Imbrium, so it is possibly the result of a comet that had been ripped into a series of smaller parts. They then impacted on the Moon in machine-gun fashion (for comparison see Catena Davy just on the west side of Ptolemaeus).

Both to the north and west of Ptolemaeus you will see long parallel valleys that have been cut out by boulders and debris flying out from the Imbrium impact. Notice how they all point directly back, with accusing fingers, to their explosive place of origin. This is lunar sculpting at its best.

• Arzachel: [SW/L9] This is the youngest crater of the three and has much to offer even for observers with small telescopes. Arzachel is a complex crater with terraces, rilles, hills, craterlets, and a slightly off-center “central” mountain which rises 4,900 ft. from the floor! Arzachel has two challenging rim craterlets. The easiest is on its northwest rim. If you can find that, then look carefully at the most prominent craterlet, Arzachel A, just to the east of the central mountain. Can you see that it has a tiny crater superimposed on its southwest rim? Enormous landslides on Arzachel were so severe that they actually opened up two valleys inside its southwest and southeast rims.

Arzachel A is nearly 6 miles in diameter, but there are a few smaller ones. Do a quick sketch of what you can see, then come back later and try to add to it.

• Alphonsus: [SW/L9] Examine the adjoining rims of Ptolemaeus and Alphonsus. Which crater do you think appeared first?1 Alphonsus is one of the more interesting craters on the Moon. It not only has a central peak and a floor that displays rilles and small craters, some of the craterlets have enigmatic dark halos around them. These halos are the result of a little-known but fascinating volcanic activity called explosive pyroclastic eruptions.2 As magma is spewing out from volcanic vents, sometimes gases that are trapped within will suddenly expand and cause the molten rocks to explode in a shower of tiny dark glass beads. The result is that the area surrounding the source vent is covered by a dark halo of pyroclastic deposits. Alphonsus is the best place on the Moon for you to see the results of this phenomenon through backyard telescopes. Three of the most conspicuous halos are located close to the east rim and are connected by a thin rille.

OF ADDITIONAL INTEREST ON THE MOON FROM NOVEMBER 7-13:

Tuesday evening will be a good time to observe the variable star Algol, “the Demon Star,” in Perseus as it climbs from its minimum brightness of magnitude 3.4 up to its normal 2.1. Observe it as soon as it gets dark enough in the evening twilight and come back every 30 minutes or so. Compare it to Rho Persei, the next star south in Perseus, which shines steadily at a convenient magnitude 3.4, and to magnitude 2.2 Almach in Andromeda, the next brightest star going west. Algol has a comparatively rapid period of three days and its entire cycle is visible to the naked eye. Algol is an “eclipsing binary” in that when its cooler companion swings directly in front of it, its light appears to be dimmed.

1 Can you see that the northern rim of Alphonsus intrudes slightly into Ptolemaeus, making Alphonsus the younger crater?
2 Pyroclastic: from two Greek words meaning “broken by fire.”

Latest posts by Andrew Planck (see all)
Favorite Show-Stopping Trio Craters on the Moon
Tagged on: lunar dates    objects on the moon