The week of August 20-26 takes us from Day 10 to Day 15, full Moon. This week we will highlight a series of rilles: Rima Hesiodus (visible Monday night), and the Hippalus and Ramsden rilles. visible on Tuesday. 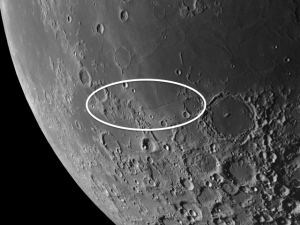 Rima Hesiodus: [SW/N7-M8] The linear rille Rima Hesiodus is a graben1 which connects with its namesake crater on its eastern end and extends in a straight line for nearly 200 miles to the southwest across the charmingly named Palus Epidemiarum (the “Marsh of Epidemics”). The eastern part of this rille was revealed last night. Tonight you should be able to see its entire length. Notice how the rille slices straight through the mountains separating Nubium from Epidemiarum without so much as a hiccup. (Day 23 may give you a better view of the full length.) 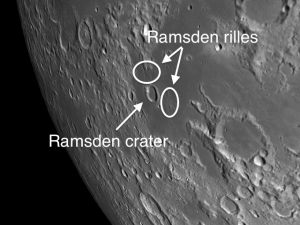 Rimae Ramsden: [SW/N6-7] If you continue following Rima Hesiodus to the southwest, it will point to Rimae Ramsden, a network of rilles just east of the crater Ramsden. Like the Triesnecker rilles [Day 6/J10], scientists have no explanation of how they got there. 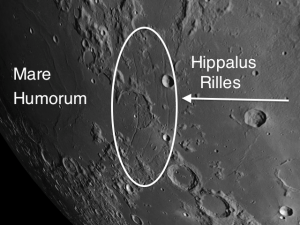 Rimae Hippalus: [SW/M6] On the east shore of Mare Humorum you will find the remnant of the crater Hippalus, whose southwest rim, because of subsidence, has disappeared into the mare. The area around Hippalus contains the finest examples of arcuate rilles to be found on the Moon. Each one is about 2 miles wide. (Catch these rilles when the terminator is around 32° west.) Notice how some of the rilles plough through mountain ridges and craters, and some are interrupted completely by small craters but continue on the other side. One prominent rille cuts straight through the middle of Hippalus. This gives you a clear indication of the sequence of activity. What features were in place before Humorum filled with lava and subsided? What features appeared after subsidence took place?

OF ADDITIONAL INTEREST IN SPACE THE WEEK OF AUGUST 20:

We are again treated to four bright planets in the sky at the same time. On Monday, from west to east, they are: Venus, Jupiter, Saturn (just 4° to the lower left of a 10 day old Moon), and Mars. This is quite a telescopic feast so haul out your telescope and treat your neighbors to a sight that many of them have never seen!

The Perseid meteor shower will peak early Monday morning, but there still should be plenty of activity on Tuesday as the Perseids have a very large window. The best times are in the early morning hours. The Perseids will produce 60-70 meteors per hour, with several fireballs, and there will be no interference from the Moon as it will have set.

Rilles on the Moon and Their Characteristics
Tagged on: lunar dates    lunar days    objects on the moon    Perseids