The week of October 3rd – 9th takes us from the end of Lunar Day 2 to the beginning of Day 8, a very fruitful time for observing. This week we will highlight the Altai Scarp, visible on Thursday.

Altai Scarp (Rupes Altai): [SE/M12] Viewable even through small telescopes, the Altai Scarp is a spectacular example of how shock waves from a major impact can compress the surrounding terrain into a series of outwardly expanding rings. Nearly 3.9 billion years ago a large asteroid or comet slammed into the Moon and blasted out the Nectaris Basin. Shock waves rapidly expanded through the surrounding terrain and became frozen in place, producing a classic multi-ring basin. (Much like a billiard ball dropped into a tub of thick, viscous mud will leave conspicuous rings of ridges around the point of impact — the advantage here is that the rings remains frozen in place for us to enjoy billions of years later!) 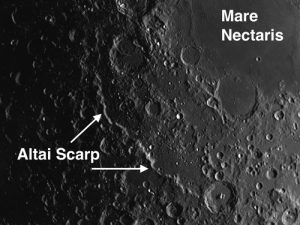 Rupes Altai is a beautiful and conspicuous fragment of the original rings. In truth, it is a circular mountain range whose highest peaks rise to 13,000 feet! But you must catch the scarp under an early morning Sun; it’s majesty fades quickly. View it on Thursday when the face of the scarp is fully illuminated, then revisit the area around Day 19 or 20 at lunar sunset. At this time, the scarp sends long shadows over the terrain to the east. Which day shows the scarp to its best advantage? Try to locate hints of other ring features surrounding Mare Nectaris.

Thursday is also a great time to revisit the magnificent trio of craters Theophilus, Cyrillus, and Catharina, just above Rupes Altai, which we highlighted on April 11th.

OF ADDITIONAL INTEREST FROM LUNAR DAY 2 TO THE BEGINNING OF DAY 8:

From Monday through Thursday, the Moon dances from Venus through the neighborhoods of Saturn and Mars. This is about your last chance to view Saturn as on Sunday evening at the end of nautical twilight it’s only 15° over the horizon as it plunges towards the Sun. At the same time, Venus is only 2° above the horizon, but it will keep climbing higher towards its greatest elongation from the Sun on Jan. 12th.