The week of September 26th – October 2nd takes us from the end of Lunar Day 25 through Day 2 (New Moon will be on Friday). On Monday, the Moon doesn’t rise until 2:35 AM (depending on how far away you are from the center of your time zone), so this is a time for very dedicated viewers. This week we will highlight the crater Aristarchus. 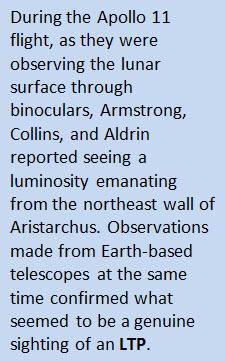 Can you make out the dark radial bands which climb straight up the west wall? Because the Aristarchus impact straddled the boundary between Imbrium and the Aristarchus Plateau, it excavated very different types of material and these multi-hued bands were the result. How many can you see? Two or three are easily visible in a 3″ refractor, but some observers have reported seeing up to nine bands! Make a drawing of what you see, then come back later and try to add to the number. Do the bands become more or less prominent with different lightning?

When observing Aristarchus keep your eyes peeled for LTP’s–just don’t hold your breath.2

OF ADDITIONAL INTEREST FOR LUNAR DAY 25 THROUGH DAY 2:

On August 15, phys.org reported that astronomers have discovered an Earth-like planet orbiting Proxima Centauri, just 4.25 light-years away and it’s in the Goldilocks Zone, very possibly has water, and is potentially habitable! Starshot, a program founded by a Russian billionaire to search for intelligent life (with backing from Stephen Hawking) intends to send a laser-sail driven-nanocraft which can reach speeds of 20% the speed of light and will reach Proxima Centauri in a mind-boggling 20 years (as opposed to 165,000 years for today’s traditional spacecraft!).

1 18th c. English astronomer who discovered Uranus.
2 LTP: A lunar transient phenomenon is a short-lived change in the appearance of the lunar surface. LTP’s are usually variations in lighting (either sudden or gradual) or color. They often manifest themselves as obscurations, foggy patches, etc.

Latest posts by Andrew Planck (see all)
Aristarchus: The Brightest Spot on the Moon
Tagged on: lunar dates    objects on the moon