The week of October 10th-16th takes us from Lunar Day 9 to the end of Day 15 (essentially still Full Moon). This week we will highlight Mare Frigoris, which is visible throughout the entire week, but starting on Saturday, you’ll be able to see the full extent of Frigoris. 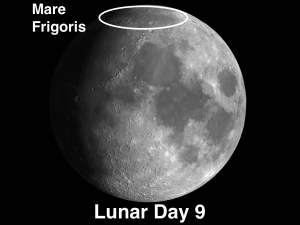 Mare Frigoris: [NW-NE/D6-13] This is the only mare patch that isn’t even roughly circular, although its northern boundary has an intriguing curve to it which may support the “Gargantuan hypothesis” (below). As the lunation progresses, you will notice how Mare Frigoris appears to connect Oceanus Procellarum to the eastern maria. It has been suggested that Frigoris is the northern rim of an enormous pre-Nectarian feature called Gargantuan Basin, which spanned 1,500 miles from the western shores of Procellarum to the 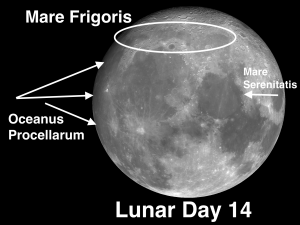 middle of Mare Serenitatis. This is nearly 70% of the Moon’s diameter and would have been an impressive wallop! Throughout the week, notice how Mare Frigoris extends itself to connect with Oceanus Procellarum, lending credence to the Gargantuan proposal.

On Tuesday morning about 40 minutes before your local sunrise time, Jupiter and Mercury will have a close conjunction. They’ll be only 0.8° apart.

On Thursday night at 1:00 AM ET (so it’s actually Friday morning), Algol will be at minimum brightness (mag. 3.4 instead of its usual 2.1) for about two hours.