The week of July 11th – July 17th takes us from lunar Day 7 through the end of Day 12. Monday at 8:52 PM EDT is the moment of true dichotomy. At that time the terminator (the shadow line) splits the Moon exactly in half. It is also a the most magnificent time to view the Moon as all of the craters, mountains, and valleys near the terminator are set off with astonishing detail! 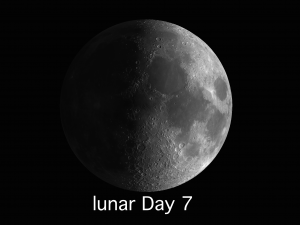 Not long ago, one of the other volunteers at the observatory where I volunteer was showing a middle-aged woman her first ever view of the Moon through a telescope. As she bent over to look through the eyepiece, her jaw dropped open and she cried out, “Oh, my God! How long have they known about this!”

If you’ve never seen the Moon through a telescope, Monday and Tuesday nights are the perfect times to do it — you will be equally astonished, and you’ll never forget the view. This week we will highlight Rimae Triesnecker.

• Rimae Triesnecker: [NE/J10] On Monday night, check out the Triesnecker rilles. What a great place to poke around with your telescope! This is such a complex system of rilles that it looks like a railway switchyard! Which do you think came first, the crater or the rilles?1

Scientists are not sure how the Triesnecker rilles developed. Their origin still remains a mystery, but the consensus is they are not grabens (two parallel fault lines that have pulled apart, and the terrain in between has sunk; e.g., the Alpine Valley and the Ariadaeus Rille). Enjoy them as one of the Moon’s many enigmas.

OF ADDITIONAL INTEREST FROM LUNAR DAY 7 THROUGH THE END OF Day 12:

On Sat. morning July 16th, shortly after midnight, the Moon will be only about 3° from Saturn. Saturn’s rings for this entire season will be wide open and are a splendid sight! You should have no trouble spotting Saturn’s moon Titan below Saturn (toward the SW horizon).

1There is a rille approaching Triesnecker’s northeast rim that looks like it has been interrupted by the crater, suggesting that the rilles were there first.Courtesy of Gray Photography of Corpus Christi, Texas

Rimae Triesnecker: One of the Moon’s Many Enigmas
Tagged on: lunar dates    objects on the moon