The week of Aug. 29th – Sept. 4th takes us from the beginning of Day 27 to Day 3. For the intrepid viewers among you, the Moon rises at 3:40 AM local time on Monday (depending on how far you are from your time zone’s center line, this can vary by ±30 minutes). 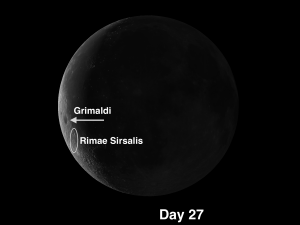 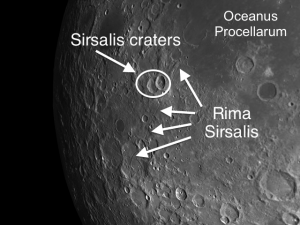 Rimae Sirsalis: [SW/L3-4] On Monday just in from the southwest shore of Oceanus Procellarum you will see two small overlapping craters, Sirsalis and Sirsalis A. Take a look at them and decide which crater is older. (It should be obvious.) Neighboring these two craters to the east and south is a complex of rilles. Rima Sirsalis is the most conspicuous, but it has lots of neighboring offshoots. How many can you see? 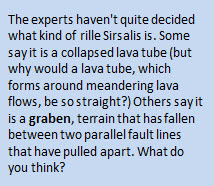 Rima Sirsalis is a gift to amateur astronomers because it can be easily seen in the smallest of telescopes. At 240 miles long and two miles wide, it is one of the longest rilles on the Moon, and it also reveals itself just before full Moon–a time when most astronomers are putting their telescopes away!

OF ADDITIONAL INTEREST ON LUNAR DAYS 27 – 3:

Late summer is a prime time to view the Milky Way, and it’s particularly rewarding to scan it with binoculars all the way from Sagittarius in the south through Cygnus and on down through Cassiopeia and Perseus. Any little thing that catches your attention will also be worth viewing through a telescope.

At public star parties, I enjoy showing people a binocular view of the Milky Way just immediately south of Sadr, the star at the center of the crossbeams that form the Northern Cross. Explain to your viewers that before 1610 astronomers had no idea what the Milky Way was. Then Galileo turned his new telescope on it and his jaw dropped. “The Galaxy is but a congeries of innumerable stars… The multitude is truly unfathomable!” I tell my viewers that at that very moment they were duplicating one of the greatest scientific discoveries ever made!

1 Sirsalis A, the westernmost crater, is older because it is overlapped by Sirsalis, the younger intruder.

Rima Sirsalis – One of the Longest Rilles on the Moon
Tagged on: lunar dates    objects on the moon