The week of Sept. 5th – Sept. 11th takes us from Day 4 to the end of Day 9. There is no better time to view the Moon than during this window! This week we will highlight the two craters Hercules and Atlas, viewable on Monday. 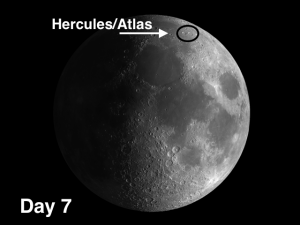 Hercules and Atlas: [NE/E13-14] Just east of the charmingly named Lacus Mortis (the “Lake of Death”) are two splendid craters, Hercules and Atlas. They have been described variously as “noble, magnificent, spectacular, scarcely surpassed.” Although in Greek mythology Hercules and Atlas were contemporaries, the craters named after them appeared at widely different times. You should be able to tell at a glance which crater is older. (Make a decision before looking at the footnote.)1 There is a large simple crater on the floor of Hercules. Can you tell if it is bowl-shaped or does it have a flat floor?2

Atlas has central peaks, rilles, a hummocky floor, and two small dark haloes known as lunar pyroclastic deposits. It is also one of the Moon’s many examples of a floor-fractured crater (FFC). 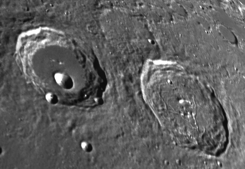 Hercules has multiple terraces, and if you look very closely at it under the right lighting you will notice two small bumps that are reminiscent of the crater Cassini, which you will encounter on Day 7 [E10]. These tiny bumps, located just north of the large internal crater Hercules G, are actually the tops of enormous mountains that have been almost entirely inundated by abundant lava flows. Hercules is also the site of reported lunar transient phenomena (LTP’s).

Did you notice that both Atlas and Hercules have blankets of surrounding ejecta, known as a glacis? The historical meaning of glacis is an artificial slope extending down from a fortification to allow the defenders to have a clear shot at the enemy when they are close. The slope of a lunar glacis will typically be a gentle 5-15°.

OF ADDITIONAL INTEREST ON LUNAR DAYS 4-9:

On Thursday Saturn will be just 3 1/2° below the moon, and the splendid globular cluster M4 will be 6 1/2° below Saturn. M4 is in the constellation Scorpius only 1.4° west of Antares. It was the first globular cluster in which individual stars were resolved, and you can do so too, with only a modest instrument.

1Because the walls are more deteriorated and its interior contains more small craters, Hercules is the older crater.

2The floors of bowl-shaped simple craters are round and their shadows will be curved. If enough debris has fallen from the crater walls to create flat floors, the shadows will be truncated; i.e., the apex will be squared off.