The week of March 27-April 2 takes us from Lunar Day 29 to Day 6. The Moon will not be in a good position for viewing until Thurs. or Fri. This week we will highlight the craters Posidonius and le Monnier on the eastern shore of Mare Serenitatis, visible on Saturday (depending on the shadows, you might have to wait until Sunday). 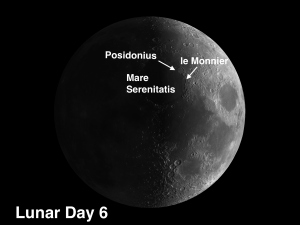 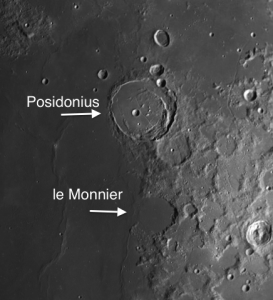 Posidonius/le Monnier: [NE/F-G13] There are only two craters of any consequence on Mare Serenitatis: Posidonius (named after a Greek astronomer/philosopher, not the god of the sea) and le Monnier. They are both textbook examples of subsidence, but Posidonius is, in addition, a floor-fractured crater (FFC). It has internal craterlets and a complex system of rilles, so you get more bang for your buck. (For its near twin, see Gassendi–Day 10.) Its substantial ramparts, which have been inundated by lava flows on the western side, are evident to the east and south of the crater’s rim. If you can make out the north-south rille on the western side of the basin floor, does it appear to curve around to the east just inside the rim (as it does in Rükl’s Atlas), or does it cleave its way through the mountains (as it appears to do in some photographs)? How does it strike you? Spend some time with Posidonius, it has a lot to teach.

OF ADDITIONAL INTEREST IN SPACE DURING LUNAR DAYS 29 – 6:

Look for the evening comet 41P/Tuttle which is just 5° north of Megrez in the Big Dipper on Monday. It’s at around magnitude 7, so it’s easily visible in small telescopes.

1 subsidence: After the large basins formed, heavy lava rose up through the cracks and fissures that were opened up. The additional weight caused many of the basins to sink toward the center. As a result, shoreline craters would tilt, and sometimes their seaward rims would actually sink below “sea level.” It used to be thought that the inward facing rims of these craters simply melted away because of the intense heat generated by the mare lavas. That explanation has now fallen into disrepute. Charles Wood points out that if that were the case, the rims of these breached craters would not systematically decrease in height toward the basin center, as they do in a large number of instances. Examples are Daguerre and Fracastorius on the shores of Mare Nectaris, Posidonius in eastern Serenitatis (all on Day 5), and Sinus Iridum, the magnificent bay on the northwest shore of Imbrium (Day 10).

2 floor-fractured crater (FFC): A floor-fractured crater is a special type of crater that has been modified by later volcanism, uplift, and consequent fracturing. Some of the common characteristics of FFC’s are that they are large, they have rilles (both arcuate and linear), they occur near the borders of maria, and (most significantly) they are very shallow for their size.

Floor-fractured craters have a fascinating genesis. Some time after the crater was formed and had settled in, magma rising up from underneath the basin actually pushed the crater floors upward (hence their shallowness). It was not an effortless process and the resulting strain caused radial and concentric fractures to appear on the floor. At times, lava would also flow upward through these fractures and spill out onto the crater floor. (Examples: Taruntius [Day 4; NE/J14], Petavius [Days 2-3; SE/M16], Sabine [Day 6; NE/J11]).