The week of April 3 – 9 takes us from the end of lunar Day 7 into Day 13, just before full moon. This week we will concentrate on Rima Ariadaeus, viewable on Monday evening. This information has been repeated from the November 16th blog as fewer people would have observed such an early morning Moon. 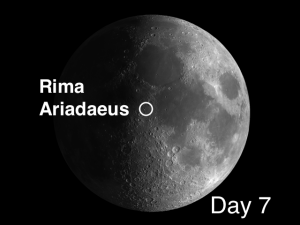 Rima Ariadaeus: [NE/J11] The best place to see rilles on the Moon is in the area just west of Tranquillity. Here you will find a remarkably varied collection–to wit, Ariadaeus, Hyginus (two of the best-known rilles on the Moon) and Triesnecker. Rima Ariadaeus started to come into view last night. All three should be visible tonight. 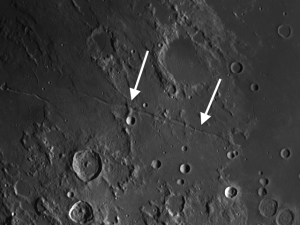 When the terminator is close, Rima Ariadaeus is an enjoyable target even for small telescopes. It is a classic example of a graben, an elongated depression between two parallel fault lines where the ground in between has fallen away. If you have at least a 4″ telescope with good optics and steady seeing you will just be able to make out that the fault lines have pulled apart and the ground in between has sunk. (This is a challenge; Ariadaeus is a shade over two arc-seconds wide.) The rille appears to be broken in a few places, indicating that the lunar terrain has shifted since it was created, and there is a shunt on its western end connecting it to Rima Hyginus.

OF ADDITIONAL INTEREST ON THE MOON JUST BEFORE THE FULL MOON:

On Monday evening, the Moon is just 4° SW of the Eskimo Nebula in Gemini. Pop up and pay it a visit. This is a type of object called a planetary nebula, a star that is in the process of dying and will resemble our Sun in about five billion years when it goes through its own death throws. At that time the Sun will run out of hydrogen fuel and start to expand. It will get so large that it will almost fill the entire orbit of Jupiter! At that point, it will throw off the outer 20% of its atmosphere which will continue to expand into space while the rest of our Sun will shrink into a white dwarf about the size of the Earth. The Eskimo Nebula is a great example of this process because you can see both the expanding outer ring and the white dwarf at the same time. Conveniently, there is a nearby healthy star just two arc-minutes away in the same FOV that you can use for comparison.

1 There is an astonishing Apollo 10 photo of the Ariadaeus rille at www.skyimage.com. Click on Search, type in “Ariadaeus,” then click on the image twice to enlarge it.

Latest posts by Andrew Planck (see all)
Ariadaeus: One of the Best Known Rilles on the Moon
Tagged on: lunar dates    lunar days    objects on the moon    tranquility