The week of June 28 – July 4 takes us from Lunar Day 19 to Day 24. This week we will highlight the craters Walther and Deslandres, viewable after midnight on Wednesday. 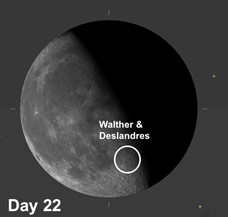 Walther: [SW/N9] You will find this 87-mile crater adjoining Deslandres just to its east. Because it has some very complex ramparts, under a setting Sun (which is the case early Thursday morning), Walther is a strikingly beautiful object. It has an offset group of central mountains, which have been impacted by several small craters.

Deslandres: [SW/N9] (day.LAHN.druh) This is a large 145-mile crater located just inland from the southeast shore of Mare Nubium which, in spite of its partially ruined state, displays a number of interesting features: craterlets, crater chains, and hills which must be viewed under a low-angle Sun. Notice how the crater Lexel, which has intruded on the southeast rim of Deslandres, seems to be a subsidence feature. Deslandres is in such a state of disrepair that it wasn’t even recognized as a crater until well into the 20th century. If you had just run across Deslandres for the first time, would you have trouble identifying it as a crater (particularly when the Sun is higher and there is less contrast)?

On June 30, 1908, a meteor, 330 feet in diameter, streaked across the sky above the Tunguska River in Siberia at an altitude of 3-6 miles above the Earth, and flattened an estimated 80 million trees. It is the largest impact event in recorded history and would have destroyed a large metropolitan area. Fortunately, because the area was so sparsely populated, only three people died.