The week of June 21-27 takes us from Lunar Day 12 to Day 19. This week we will highlight the craters Seleucus and Bailly, viewable on Wednesday night.

Seleucus1: [NW/G3] Seleucus is an admirable little 27-mile crater sitting by itself on the Procellarum lava plains west of Aristarchus and Herodotus. It has a central bump aspiring to be a mountain, a sharply defined ejecta blanket, and terraced walls that rise to more than 10,000 feet. 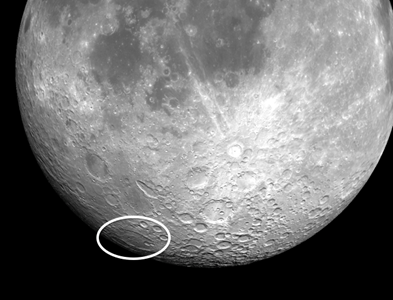 Bailly: [SW/R3] Very close to the SW rim. To observe this crater, it is best to wait for a favorable libration. It is a pity that Bailly lies so close to the western limb. It is the largest crater on our side of the Moon, and at just under 200 miles it should qualify as a basin. It has ridges, internal craters, and a hint of some multi-ring features. Because its floor has not been flooded by lava, it retains much of the original detail from the moment of its creation. At over three billion years of age it’s a bit tired and worn down but worth visiting.

Seleucus 1: (fl. 150s BCE) Seleucus of Selucia, the man after whom the crater was named, deserves to be better known. He was a Greek philosopher and astronomer who ardently defended the heliocentric theory proposed by Aristarchus of Samos 100 years earlier. Seleucus was also the last heliocentric defender until Copernicus! In spite of their many significant contributions, Aristotle, Ptolemy, and their powerful earth-centered ilk managed to set back the progress of astronomy for 1,500 years. Kenneth Davis reports in his book Don’t Know Much About the Universe that the Catholic Church did not officially concede that the Earth revolved around the Sun until 1922!