The week of August 28 – September 3 takes us from Day 7 to Day 12. This week we will highlight the crater Cassini, visible on Tuesday evening. (Although Cassini was covered in the 12/19/16 blog, we are repeating the information here as it was not visible until the early morning).

Cassini: [NE/E10] Can you tell by looking at Cassini that it was created on the Imbrium floor before the lavas started to flow? The floor of Cassini appears to be at sea level with the rest of Imbrium (this would not be possible if Cassini were created after the lava flows), and aside from a few obvious disturbances, much of it is quite smooth. Cassini’s size (35 mi.) and the width and complexity of its ramparts suggest that its basin should have substantial depth and central mountain peaks, but it is quite shallow.

Take a close look at Cassini under high magnification. The two tiny bumps (you might see three) just to the southwest of the largest internal crater give you a clue about the timing of the impact. Cassini was at one time quite deep, with central mountains appropriate to its size. The post-Imbrium lavas that flooded the crater rose so high that all that is left of the once impressive central mountain peaks are these little bumps. 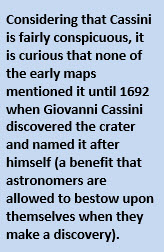 The floor of Cassini is covered with features, some of which can be easily seen with a small telescope, but others are quite delicate and require larger apertures and good seeing. Make a rough sketch of what you see and come back later to fill in more details. You will have no trouble with the two larger internal craters, Cassini A (9 mi.) and Cassini B (6 mi.). Can you see how Cassini A is shaped like a teardrop pointing toward the northeast? The teardrop shape was the result either of a closely spaced double impact or of an oblique impact.

Notice how Cassini’s glacis, a wreath-like outer rim that would normally extend out farther, has been partially covered by the flow of Imbrium lavas. Cassini and Archimedes [NW/G9] share a similar history. Compare them closely to see what characteristics they share in common.

OF ADDITIONAL INTEREST ABOUT THE SOLAR ECLIPSE ON AUGUST 21, 2017:

I hope everybody who wanted to was able to see the solar eclipse. It was a thing of astonishing beauty.

My good friend Don McKee, a non-astronomer, saw the eclipse and wrote a beautiful description of the experience. I asked him for permission to post it on this blog.

21 Aug ‘17
CARHENGE
Alliance, Nebraska
I was there.

I cannot express in words what I saw today–the adjectives don’t exist. But I’ll try to muddle around it.

I had no idea that I would be short of breath and trembling and teared-up and mute. It hit me hard. I am an emotional person and I know it–but holy cow. I thought it would be fascinating, novel, a neat thing to say you had seen. It is personal and intense and beautiful beyond words. It lasts just long enough to take it in but not long enough to satisfy.

And then the lights come on and everybody drives home very very slowly.