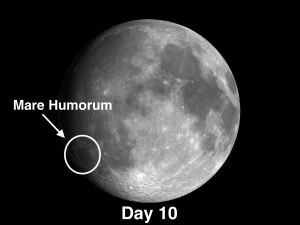 The week of Sept. 12th – Sept. 18th takes us from the end of Day 10 to Day 17, with Full Moon on Friday. This week we will highlight the area around Mare Humorum.

Mare Humorum: [SW/M6] The Humorum basin is one of the best examples of subsidence that you can see on the Moon. As the basin sank under the weight of its lavas, arcuate cracks, which can be easily observed in small telescopes, opened up on the east side around Hippalus and on the west side. The craters Doppelmayer, Lee, Hippalus, and Loewy tilted inward and their seaward rims sank beneath the lava flows which covered Mare Humorum. 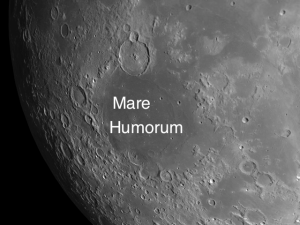 Three generations of crater age can be easily observed on Mare Humorum. In descending order of age we have Mare Humorum itself, which is overlapped by the younger crater Gassendi on the north rim, which in turn is overlapped on its north rim by Gassendi A. (Both Gassendis taken together are sometimes referred to as the diamond ring.) The usually dependable rule in play here is that smaller craters are younger (there are some exceptions). The invariably dependable rule is that the topmost overlapping crater is always younger. 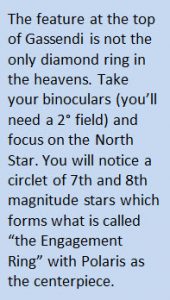 Gassendi is a double prize in that it is a floor-fractured crater with a nice set of central mountain peaks, the highest of which rises to 4,000 feet. It is also a textbook example of subsidence. Notice how there is a small amount of smooth mare inundation near the S.E. portion of the rim. 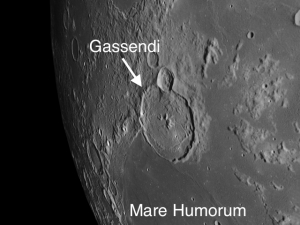 Gassendi A: [SW/L6; L=40°W] This is the gemstone in the “diamond ring” mentioned above (the small unnamed crater at the top of Gassendi). Although Gassendi A is much smaller than Gassendi, its walls are one mile higher because it is not a floor-fractured crater; i.e., underlying pressure never caused its floor to rise abnormally, as is the case with Gassendi.

1 A mare (sea) is nothing more than a large crater that has been filled in with lava.
2 Due to dramatic subsidence, the walls of Gassendi slope down from a height of 6,100 ft. to a mere 200 ft. There seems to be one small breach where it looks like the wall has fallen almost to sea level.