The week of October 17th-23rd takes us from Lunar Day 17 (just after Full Moon) into Day 23. This week we will highlight the Great Eastern Chain, visible on Monday night. 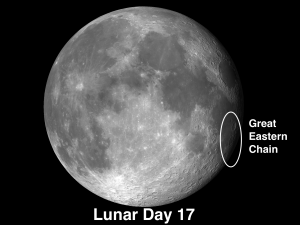 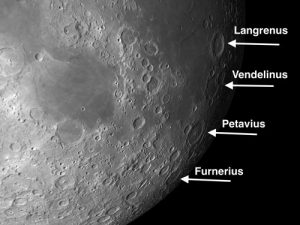 The Great Eastern Chain: [SE/K-N16] There is a conspicuous chain of large craters, at one time referred to as the Great Western Chain1, which closely hugs the same meridian near the eastern limb (i.e., the rim of the visible disk) of the Moon. They start on the southeastern shore of the Sea of Fertility and continue south2 . The chain consists of Langrenus, Vendelinus, Petavius, and Furnerius. Although this unusual alignment is coincidental, it was once posited as evidence to support the endogenic theory of crater formation–the now disproven theory that the majority of craters were formed by volcanic forces originating from within the Moon.

• Langrenus & Vendelinus: [SE/K-L16] These craters are the first two segments of the Great Eastern Chain. Langrenus and Vendelinus are two large 90-mi. craters located on the southeast shore of Fertility. One is considerably older than the other and appeared before the lava flows started. It should be easy for you to decide which is which.3

On Monday night, the terraces and central peaks of Langrenus should stand out with clear detail and will be a beautiful sight. Even if you have a small telescope, there is much to be seen in the interior and on the outer ramparts to keep you busy. Because the appearance of the crater changes significantly with different lighting angles, make some drawings of what it looks like tonight and come back on Days 3-6 to compare the views.

The younger crater Lamé intrudes on Vendelinus on its NE rim, and it is appropriately smaller. However, notice that Lamé, in turn, overlaps two smaller unnamed craters on its SW rim. This is unusual in that intruding craters are almost always smaller than the craters they impact on. 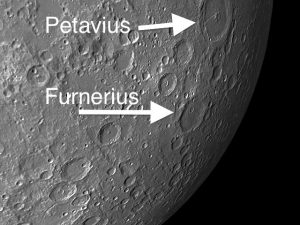 • Furnerius: [SE/N16] This is the southernmost of the craters that make up the Great Eastern Chain and it is very old, having formed before the impact that created the Nectaris basin 3.9 billion years ago. Although the walls have been battered down and show their age, there are still many complexities remaining which will reward careful observation. There are several craterlets of varying sizes on the floor of Furnerius, including a 30-mile rille extending from the north rim toward the southeast. Patrick Moore reported that there are fourteen large craters and several craterlets in its interior. (A more reasonable assessment would be there is one large crater and several craterlets.) Make a rough sketch of how many you can see, then come back next month (and on Day 3) to see if you can add to the count. Can you match Patrick Moore’s observing skills?

• Petavius: [SE/M16; L=60°E] This is one of the most fascinating craters on the Moon. It is an example of a floor-fractured crater (FFC), a type of crater that has been modified by later volcanism, uplift, and consequent fracturing. The floor of Petavius is nearly 1,000 feet higher near its center than around the edge! Is the curvature of the lunar surface apparent on its floor? Turbulence and volcanic upheaval from below split the central mountain (which rises to nearly one mile above the floor) and formed the rilles. 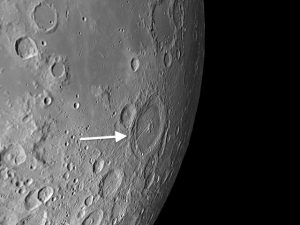 OF ADDITIONAL INTEREST FROM LUNAR DAY 17 INTO DAY 23:

Here is an interesting naked eye challenge for you: if you have good eyesight and can see down to magnitude 6 (the lower limit for most people) and are in dark skies, try to spot the planet Uranus around 8:00 PM local time starting on Tuesday (when the Moon is out of the sky). It’s in the constellation Pisces. Although at magnitude 5.7 it is technically a naked eye object, because it is so dim it never attracted anybody’s attention until Sir William Herschel stumbled across it with his telescope in March, 1781. At that time it was at magnitude 5.6 (giving him a slight naked-eye edge) and occupied a much more interesting neighborhood just 4° away from the open cluster M35 and 4° from the Crab Nebula in the other direction. However, Herschel did not report that he was able to see it naked eye, so see if you can do what Herschel could not do (or chose not to do)—spot Uranus without the aid of a telescope. (It’s okay to cheat and use a telescope or binoculars to locate it, then see if you can spot it without optical aid.)

Here is a special treat: Late Tuesday night for the west coast (early Wed. morning for the east coast) the Moon occults 1st magnitude Aldebaran (along with some other Hyades stars). The graze line for this event runs from Los Angeles through Denver, but most of North America will be able to see a full occultation. If you’re lucky enough to live on (or get to) the graze line, you will be able to see Aldebaran wink on and off as it appears and disappears from behind mountains on the Moon’s rim. For specific timing details for 1,000 cities, go to http://www.skyandtelescope.com/observing/.

1 In 1961 the International Astronomical Union reversed the east-west directions on the Moon.
2 The sea’s official (and somewhat cumbersome) name is Mare Fecunditatis. I prefer the simplicity of “Fertility.”
3 Because it is so heavily worn and has had time to acquire many overlapping smaller craters, Vendelinus is the older.

The Great Eastern Chain on the Moon and a Naked Eye Challenge
Tagged on: lunar dates    objects on the moon