The week of July 16-22 takes us from Day 4 to Day 10. This week we will highlight the craters Thebit and Alpetragius, viewable on Friday evening. 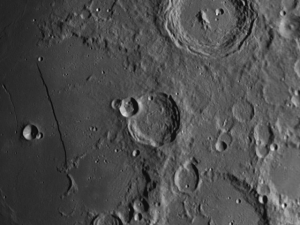 Thebit: [SW/M9] On the eastern shore of Mare Nubium, just to the west of the gap separating Arzachel from Purbach, lies Thebit–a textbook example of how to tell crater ages by their size and placement. Check out the series of craters overlapping Thebit and figure out the sequence of their appearance–this should be an easy process by now. (Check the footnote if you’re not sure.) Can you make out the terracing on the east rim and the two tiny craters that have intruded on the north rim? 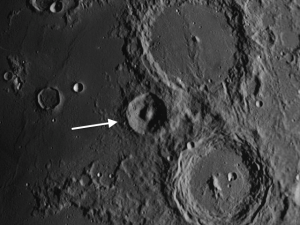 Alpetragius: [SW/L9] Now we come to a crater that’s just plain cute! Under the right lighting, Alpetragius (not to be confused with Albategnius–SE/L10) looks remarkably like an oversized ostrich egg sitting incongruously in a smaller bird’s nest. This is an unusual crater because even the largest central mountain peaks rarely take up more than one-third of the crater floor. Because of its large peak, Alpetragius is just bursting at the seams! So far nobody has come up with an adequate explanation of why this is so.

OF ADDITIONAL INTEREST IN SPACE AND THE MOON THE WEEK OF JULY 16:

National Moon Day will be on Friday. It has nothing to do with observing the Moon with a telescope but celebrates the first landing on the Moon on July 20, 1969.

Mars is speeding towards opposition on July 26th when it will be opposite the Sun and high in the sky. This is an especially good opposition because Mars hasn’t been this big and bright since 2003. The disadvantage is that there is a full moon on July 27th. It helps that Mars will be a very bright magnitude -2.8, but it’s still a nuisance to have the full moon so close. Try observing Mars the week after full moon so there won’t be so much interference. Mars will still be at mag. -2.8 and have the same apparent size of 24.3 arc-seconds.

How to Tell Crater Ages by Their Size and Placement
Tagged on: complex craters on the moon    lunar dates    lunar days    National Moon Day    objects on the moon