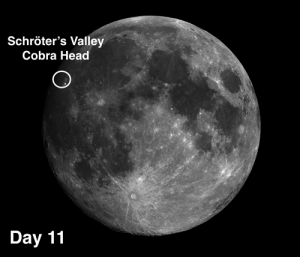 The week of July 23-29 takes us from Day 11 to Day 16. Full Moon is on Friday. This week we will highlight Rima Marius, visible on Tuesday night at 11:00 PM EDT, also Schröter’s Valley and the Cobra Head volcano viewable on Tuesday night.

Rima Marius: [NW/H4-5] Just to the northwest of the crater Marius C is Rima Marius, a sinuous rille that extends for 150 miles. When the rille starts out, it is about 1.2 miles wide (~1 arc-second), but it tapers down to only 0.3 miles. Because a line can be easily distinguished when a point of the same diameter is totally invisible, you should be able to see the rille when its width is well below the theoretical limits of your telescope. See how far you can extend Rima Marius across the lunar surface. 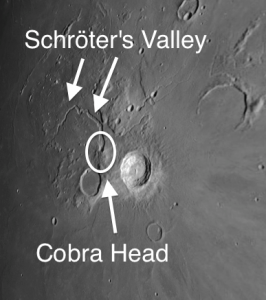 Schröter’s Valley/Cobra Head: [NW/G5-4] Schröter’s Valley is the Moon’s most impressive sinuous rille and was created when a monstrous lava tube collapsed. It begins at a volcano that is popularly known as “the Cobra Head” and then meanders for 100 miles toward Oceanus Procellarum. For most of its length it varies between three and six miles wide and is up to 3,000 feet deep. It is estimated that at the peak of its activity an incredible 10 million tons of lava per second flowed through Schröter’s Valley! At the end of its 100-mile journey the lava dramatically cascaded over a 3000-foot-high cliff into Oceanus Procellarum, which it then filled to a depth of 600 feet!

OF ADDITIONAL INTEREST ON THE MOON THE WEEK OF JULY 23:

Well there’s good news and bad news: The longest lunar eclipse of the century will occur on July 27, and it will be visible from almost the entire world, except the United States!

On July 18, the International Astronomical Union announced the discovery of 12 new moons orbiting Jupiter. This brings the total number of Jupiter’s satellites to a whopping 79!