The week of July 9-15 takes us from Day 26 to Day 3. Because the week straddles New Moon, which is on Thursday, there are no days which are particularly good for viewing the Moon. 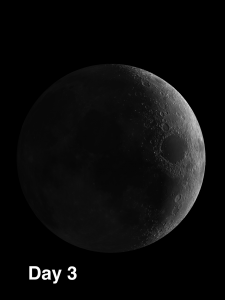 However, one of the loveliest views of the Moon can be seen on Sunday evening after the Sun has set, and to appreciate it, you don’t even need a telescope. Go out just as deep twilight is ending and look west. The Moon will seem magically suspended over the horizon, and its dark side will be softly glowing from earthshine1. At such times the daylight portion of the Earth shines a beacon of reflected sunlight toward the Moon whose dark side acquires a lovely ethereal glow. We perceive this glow as earthshine. It is particularly lovely when Venus is suspended just next to the Moon, as will be the case on Sunday (only 1° away!), and if you can possibly add the aroma of nearby lilac bushes, then you will have created a scene of transcendental beauty. It is a time for lovers and poets.

OF ADDITIONAL INTEREST IN SPACE FROM JULY 9-15

Mars is speeding towards opposition on July 26th when it will be opposite the Sun and high in the sky. This is an especially good opposition because Mars hasn’t been this big and bright since 2003.

1 This is a monthly phenomenon referred to as the old Moon in the New Moon’s arms.