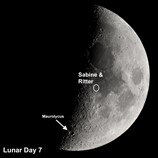 The week of June 14-20 takes us from Lunar Day 4 to Day 11. This week we will highlight the craters Sabine & Ritter, located near the S.W. shore of Tranquillity.

Sabine & Ritter: [NE/J11] About 60 miles west of the Apollo 11 landing site you will see two curious craters: Sabine and Ritter. They are unusual because they should be deeper than they are. Look closely at Sabine (the easternmost) and you will see that its shallow floor looks like it has been cut out by a giant cookie cutter. Both Sabine and Ritter are floor-fractured craters (FFC’s). The pressure of upwelling magma from underneath has actually raised the floors to their present unnatural level.

Whilpool Galaxy: The last star at the tip of the handle of the Big Dipper

Starting on Monday and throughout the week, take your binoculars and look about 3 ½° SW of Alkaid, the last star at the tip of the handle of the Big Dipper and you will see the beautiful Whilpool Galaxy, M51, discovered by Charles Messier in 1773. It is 31 million light years away. If you have a reflector of 8″ aperture & dark skies you’ll be able to pick out M51’s spiral arms. (Or give it a try with smaller apertures.)