The week of April 25-May 1st takes us from lunar Day 18 through Day 24. Full moon has passed and the terminator has advanced enough that we can begin to see clearly delineated features close to it. This week we will highlight the Cauchy domes. 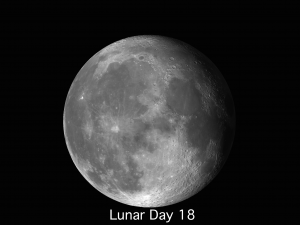 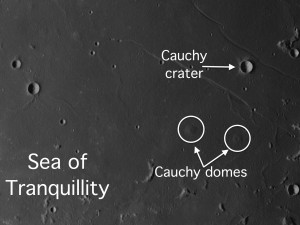 • Cauchy domes: [NE/J13] Domes are low rounded structures found in mare areas where rising magma has pushed upward and caused the lunar surface to bulge out in blister-like swellings. Sometimes the underlying pressure was not enough to cause the magma to break through, at other times the domes erupted into small, gently sloping shield volcanoes, and their summit pits can be seen under low-angle lighting and good seeing conditions. Both types of domes can be seen here south of Cauchy crater. Can you see the tiny crater pit on top of Cauchy (omega), the dome to the east? 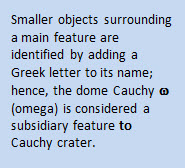 Lunar domes are not attention grabbers like the more spectacular craters and mountain ranges, so they are easily overlooked–but they are well worth the effort. Because the endogenic theory1 of crater formation has now largely been disproven, it’s fun to hunt down evidence that there really was volcanic activity on the Moon. You will need at least six inches of aperture and 150 – 300 power.

OF ADDITIONAL INTEREST ON LUNAR DAYS 18-24 – SATURN A SHOWSTOPPER:

On Monday around midnight, the Moon, Saturn, Mars, and the star Antares will be close together. Mars will be a bright magnitude -1.3 and will have grown in size to 15.3 arc-seconds on its way to opposition on May 22nd (when it will be mag. -2.1 and 18.4 arc-seconds). The next couple of months are great times to observe Mars. It won’t be this close again for another two years. Because Antares has a similar red color, it was (and still is) frequently mistaken to be Mars (hence the name Antares, “the rival of Mars”). Antares is conveniently close-by for the next month and will give you an opportunity to visually compare it to the red planet.

Saturn is always a showstopper and will be at magnitude +0.2. The planet’s apparent size, excluding the rings, will be 18 arc-seconds, but you’ll have to view it in the early morning hours for it to be high enough to see its details clearly. Wait until the summer when it can be viewed during decent hours.

Jupiter is well-positioned for evening observing through July, and on Friday, April 22, Jupiter’s moon Io will begin a transit across Jupiter’s face at 9:43 PM EDT. The dark north equatorial belt behind it will afford some contrast. Io’s black, clear-cut shadow will begin its transit at 10:44 PM EDT, followed by Europa at 12:39 AM EDT and its shadow at 2:46 AM. The Great Red Spot will be fully visible starting at 9:38 PM on Friday evening.

Cauchy Domes on the Moon and Saturn a Showstopper: Lunar Days 18-24
Tagged on: lunar dates    objects on the moon