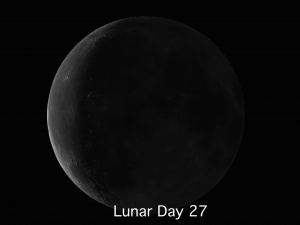 The week of May 2-8 takes us from lunar Day 25 through Day 3. The Moon can’t really be profitably observed this week. On Monday, it won’t be high enough to view until it’s almost sunrise, and on Sunday evening, it’s only 2½ days old and a scant 13° above the horizon at 9:00 PM, the end of nautical twilight. But on Saturday, you will have an opportunity to catch what is perhaps the youngest Moon you’ve ever seen! Start scanning the western horizon 20 – 30 minutes after sunset. Binoculars will help but make sure the Sun has fully set. Accidentally viewing the Sun through binoculars may cause permanent eye damage!

OF ADDITIONAL INTEREST FROM LUNAR DAY 25 THROUGH DAY 3:

Jupiter is well-positioned for evening observing through July, and on Friday, May 6, Jupiter’s Red Spot is fully visible at 10:25 PM EDT. Although it’s comparatively large, it is sometimes difficult to see, but look on the south equatorial belt just in from the Jupiter’s limb.

Castor is a nice double star in Gemini and will be visible all week and will be more or less 50° above the horizon. The two brightest stars at the top of Gemini are Castor (on the right) and Pollux. Castor has a 3rd magnitude companion separated from it by 5.1 arc-seconds. You will only need 50x to split the two. This is actually a binary system of six stars, but you will be able to see only two. (Six is the upper limit for a multiple system. At more than six, the system will rip itself apart.)

The mythology behind Castor and Pollux is interesting. Castor and Pollux were inseparable brothers. Castor was a mortal but Pollux, being the son of Zeus, was immortal. They both joined the Roman army and when Castor was killed in battle, Pollux was so grieved that he prayed to Zeus that he might die so that he could be with his brother. Zeus granted his wish and placed them both in the heavens. Because the brothers were so unusually devoted and faithful to each other, from that point on, Roman soldiers swore an oath of fidelity by their constellation, saying “By Gemini, I swear my allegiance…” which is echoed in today’s slang expression “By jiminy!”