The week of August 21-27 takes us from New Moon to Day 6. This week we will discuss the thinnest crescent you can see with the naked eyes (try for it on Monday through Wednesday).

Because the Moon is so very low on the horizon, looking for features on Days 1 and 2 is really not worth the trouble. Wait until the first two days after full Moon when you can see these features to greater advantage. However, some astronomers play a game of trying to spot the earliest possible Moon with the naked eye. Although it’s fun to try this shortly after each new moon, the best times for this exercise is in March and April because the ecliptic (the apparent path of the Sun and planets against the starry background) is more perpendicular to the horizon. 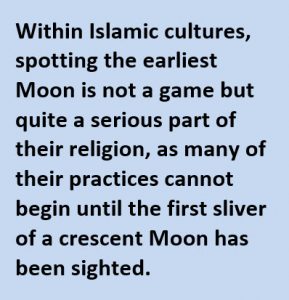 As a result, after the Sun sets, a closely trailing Moon will become visible in a dark sky more quickly than at other times in the year. After the Sun has set and twilight has begun, check out the area around the sunset point on the horizon for the Moon. If you don’t have any luck, scan the area with binoculars and if you can see a thin crescent try it with your naked eyes. Do not attempt this with binoculars until the Sun has completely set. Permanent eye damage may result if you accidentally view the sun through binoculars!

OF ADDITIONAL INTEREST IN SPACE THE WEEK OF THE TOTAL SOLAR ECLIPSE:

The new moon on Monday will coincide with a chance-of-a-lifetime total solar eclipse! The path of totality will stretch from the N.W. United States to the S.E., but the entire United States will be treated to at least a partial eclipse. I assume that everybody has their travel plans in place, but a last minute caveat: The Denver Post has reported that in Colorado, where I live, they estimate that on the morning of the eclipse, I-25 going north will be clogged with 600,000 people all trying to make it to Wyoming in time for the eclipse. As a result, many, if not most, will never make it in time. I suspect the story will be similar in other parts of the country, so if you planned to travel on the morning of the eclipse, you might want to make different arrangements.