The week of August 15th-21st takes us from Day 12 through Day 18. Full moon is on Thursday the 18th, so to see crater contrast you must look very near the terminator a few days before and after full moon. This week we will feature the crater Wargentin. 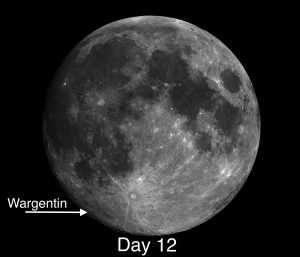 • Wargentin: On Monday night, check out the crater Wargentin (Field Map of the Moon grid SW/P4). This is one of the more unusual craters on the Moon. When you catch Wargentin in the right light, it has a fascinating story to tell. There is an almost inviolable rule that crater floors must be lower than their surrounding terrain. Not so with Wargentin! Unlike most crater impacts that leave obvious depressions, the projectile that created Wargentin blasted out a large hole, then opened up cracks and fissures that pierced through to the molten zone far below. Subsequently, hot lava rose through these openings, filled Wargentin’s empty bowl to the brim, then inexplicably stopped just before spilling over! 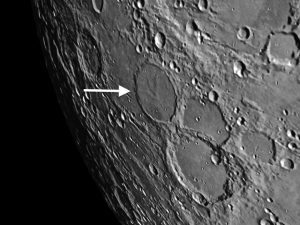 OF ADDITIONAL INTEREST IN SPACE FROM AUGUST 15-21st:

Mercury, Venus, and Jupiter are very low over the western horizon at the end of civil twilight around 8:30 PM in your time zone. As soon as the brighter stars appear, scan the western horizon below Jupiter and you will see something that the great Copernicus himself never saw, the planet Mercury. Next week, on Aug. 27th, Venus and Jupiter will be practically on top of each other with only 0.1° separating them.

Latest posts by Andrew Planck (see all)
Wargentin: One of the More Unusual Craters on the Moon
Tagged on: lunar dates    objects on the moon