The week of March 18-24 takes us from Day 12 to Day 19. This week we will highlight Mare Frigoris and the crater Shickard, viewable on Monday evening. 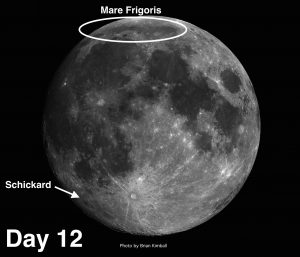 Mare Frigoris: [NW-NE/D6-13] This is the only mare patch that isn’t even roughly circular, although its northern boundary has an intriguing curve to it which may support the “Gargantuan hypothesis.” As the lunation progresses, you will notice how Mare Frigoris appears to connect Oceanus Procellarum to the eastern

maria. It has been suggested that Frigoris is the northern rim of an enormous pre-nectarian feature called Gargantuan Basin, which spanned 1,500 miles from the western shores of Procellarum to the middle of Mare Serenitatis. This is nearly 70% of the Moon’s diameter and would have been an impressive wallop! See if you can trace the entire outline of this putative basin tonight and tomorrow night. Do you think the Gargantuan proposal has merit? 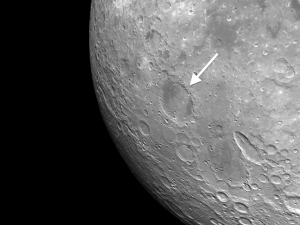 Schickard: [SW/P4] When you look at Schickard you should immediately notice something unusual: Schickard’s floor has stripes! It is dark on both the north and south ends, but there is a wide central stripe of lighter material. You are looking at terrain that is made up of two different chemical compositions and is a result of a combination of lighter highland material that was blown in from the formation of the Mare Orientale basin and dark basaltic material (molten lava that welled up from underneath) on the northern and southern portions of Schickard.

SPRING OR VERNAL EQUINOX – ONLY TIME OF YEAR TO STAND AN EGG ON END?

The spring equinox (aka vernal equinox) will occur this week on Wednesday, March 20. This is a time when the Sun, which has been moving steadily northward since the winter solstice, crosses the celestial equator, and night and day are of equal length (hence the term equinox, “equal night”)

There is a persistent belief that resurfaces once a year that on the vernal equinox it is possible to stand an egg on end. There is a good chance that you will see some news media reporting this and will even visit science classes in schools where students put this to the test. To everyone’s astonishment, some students are successful, thus proving that once a year mysterious forces come into play that are not completely understood.

However, if the news media were to revisit the same class a week or a month later they would discover roughly the same percentage of students would again be successful at standing an egg on its end. (This never happens because the strict rule is that the event must transpire on March 20 and it never occurs to anybody to test it out on a later date.) The simple explanation is that the end of an egg has tiny bumps on it and with persistence a student will find three bumps that will serve as a type of mini-tripod that will hold the egg steady on its end.