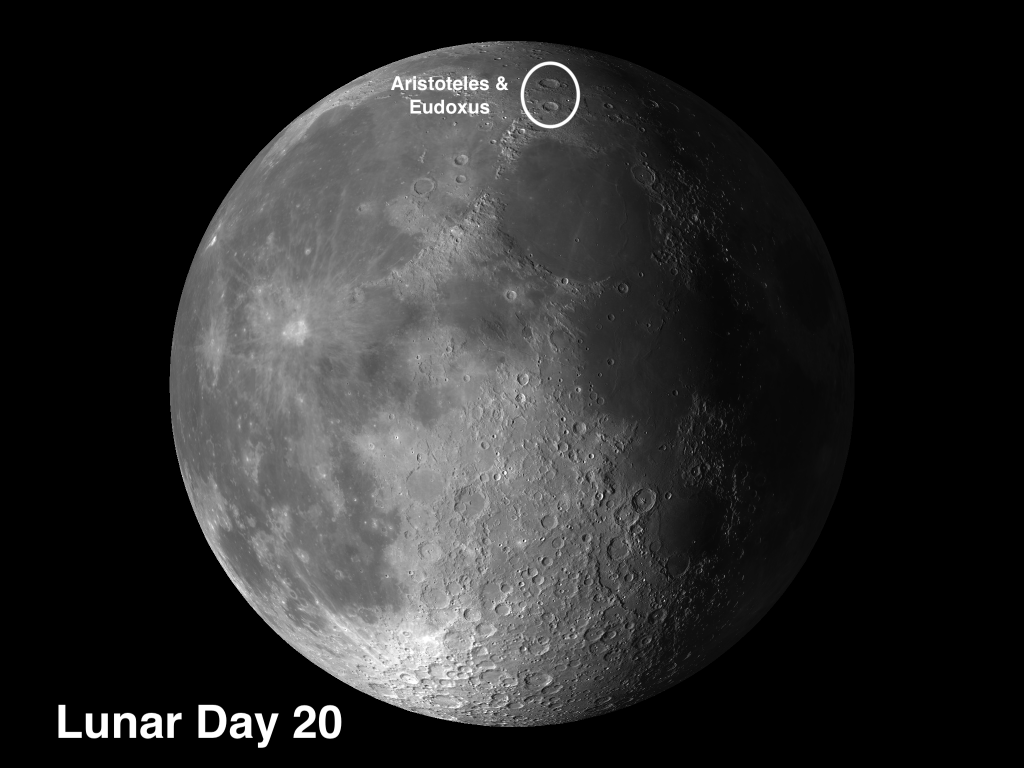 The week of March 25-31 takes us from Day 20 to Day 25. This week we will highlight the craters Aristoteles and Eudoxus, viewable early Tuesday morning.

Aristoteles1: [NE/D11] Close to the terminator this morning there is an eye-catching pair of craters, Aristoteles and Eudoxus. Aristoteles is a complex crater with terraces, but in place of a central mountain it has a couple of small off-center peaks that are poking through the lava plain on its floor. The substantial ejecta blanket to the north of Aristoteles clearly shows radial structure, and if you catch it in the right light it will look like many points of light peeking through the shadows. 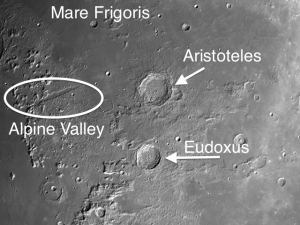 Aristoteles adjoins the crater Mitchell to its immediate east. The pair violates the standard rule that smaller, younger craters are superimposed on top of larger, older craters. Can you tell that the younger (and larger) Aristoteles is intruding onto Mitchell (which is older and smaller)?

Eudoxus2: [NE/E11] Both Eudoxus and Aristoteles to its north are wonderfully complex craters with terraced walls. Look closely at the pair. It’s subtle, but can you see any features that would suggest which is older3? Just to the northeast of Eudoxus are three simple craters. Can you tell if their floors are bowl-shaped or flat?

1 Aristotle: (384-322 BCE) Greek philosopher, student of Plato, and teacher of Alexander the Great. Because Aristotle believed that the circle was the “perfect” shape, he taught that the universe was spherical, finite, and centered on the Earth. But he also was one of the first scholars to teach that the Earth was round.

This was not based on a fanciful belief in the “perfection” of spheres, but on scientific evidence: He simply noticed that as one travelled north, the otherwise immovable North Star rose higher over the horizon. The only possible explanation was that the Earth was round. He also knew that lunar eclipses were caused by the shadow of the Earth, which was unmistakably curved.

2 Eudoxus: (c. 410-350 BCE) Greek astronomer and student of Plato who created a system of 27 spheres to account for the movement of the celestial bodies. This model of the solar system, in various forms and modifications (most famously by Ptolemy) persisted until Copernicus in the 1500s.

3 The south wall of Aristoteles has been damaged and pushed in by debris that was ejected from the impact that created Eudoxus.