The week of October 22-28 takes us from Day 13 to 19. This week we will highlight the craters Wargentin, Nasmyth & Phocylides, viewable on Monday evening. 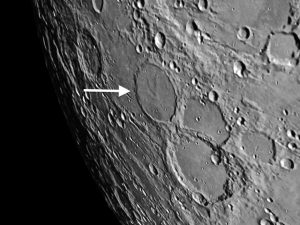 Wargentin: [SW/P4] This is one of the more unusual craters on the Moon. When you catch Wargentin in the right light it has a fascinating story to tell. There is an almost inviolable rule that crater floors must be lower than their surrounding terrain. Not so with Wargentin! Unlike most crater impacts that leave obvious depressions, the projectile that created Wargentin blasted out a large hole, then opened up cracks that pierced through to the molten zone far below. Subsequently, hot lava rose through these fissures, filled Wargentin’s empty bowl to the brim, then inexplicably stopped just before spilling over!

If the sun is at a low enough angle, the wrinkle ridge pattern on the surface of Wargentin looks as if an enormous chicken stamped its foot on the ground and flew off just as the lava congealed, leaving its imprint to tantalize the imagination of future astronomers.

Nasmyth/Phocylides: [SW/P-Q4] While you’re in the neighborhood of Wargentin, take a look at its two neighbors to the south, Nasmyth and Phocylides (nayz’-myth; foh-sil’-ih-deez). Under the right lighting conditions, they look remarkably like a boot print (probably in hot pursuit of the chicken that just flew off from Wargentin).

OF ADDITIONAL INTEREST ON THE MOON THE WEEK OF OCTOBER 22-28:

For those who are new to this blog, the author has written a book on observing the Moon titled What’s Hot on the Moon Tonight? The Ultimate Guide to Lunar Observing. It is a nightly guide to the Moon’s most interesting features as they are revealed throughout the lunar month. It is highly recommended that you obtain Sky & Telescope’s Field Map of the Moon. Lunar features that are described in the book are keyed to the grid in the Field Map of the Moon.

I was fortunate in that Charles Wood, author of The Modern Moon: A Personal View, a writer for Sky & Telescope and the country’s leading authority on lunar observing, was willing to write the foreword. The book is available on Amazon and from my website, AndrewPlanck.com. (If you would like a signed copy, please order from my website.)

An e-book version of What’s Hot on the Moon Tonight? The Ultimate Guide to Lunar Observing is now available on iTunes and Kindle. An additional feature is that in the e-book version, the longitude of lunar objects has been added to the grid reference, e.g., Plato: [NW/D9; L=9°W], meaning open the Field Map of the Moon to the NW quadrant, grid D9, Plato is at longitude 9°W. The longitude of a feature is enormously helpful when you are planning a night’s observation because any object which is within 15° or so of the terminator will stand out with astonishing detail!1

1 To find out what the longitude of the terminator will be for any night, download the free Virtual Moon Atlas onto your computer. Set the date to when you wish to observe, then click on a crater on the terminator and read its longitude. Or use the Moon Map Pro app if you are lucky enough to have gotten it before it became unavailable on iTunes.