The week of June 20-26 takes us from lunar Day 15 through Day 21. On Monday the Moon is essentially full, and craters will not start to have good definition near the terminator until Wednesday. This week we will highlight the crater Tycho. 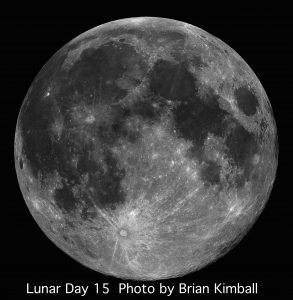 Tycho: [SW/P8] On lunar Day 8 we got to see Tycho strutting about as the prototype of complex craters. Now we get to see its other face: it has the most spectacular system of rays on the Moon, and on Monday they blossom into their full glory. 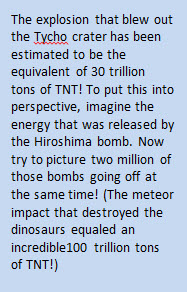 As you gaze at the ray system, try to appreciate the force behind an impact that would scatter boulders more than a thousand miles across the surface of the Moon. It is popularly assumed that these rays have the texture of face powder and that an astronaut would have difficulty detecting them if he were standing in the middle. Such is not the case. The brighter rays are made up of ejected rubble that consists of crushed rock and boulders that are up to a couple of feet in diameter. Large rays are commonly several feet thick and would be difficult to walk through. 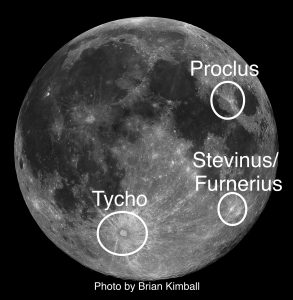 With one curious exception, all the rays converge, quite logically, on Tycho, their point of origin. But there is one ray extending from the S.W. portion of Tycho’s nimbus (the dark collar that just encircles the rim) that does not lead us directly back to Tycho; it is actually tangential to it! Copernicus has some similarly curious rays. What ballistic fluke happened in the immediate aftermath of the explosion to have sent the debris on such a bizarre flight path? 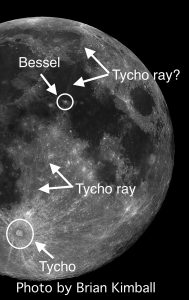 The Tycho ray pattern gives us important information. Notice how the rays are not equally distributed in all directions but fly off toward the northwest, east, and southwest; however, there is a large empty zone toward the west (called “the forbidden zone”). This is where the impactor came from. This butterfly pattern is indicative of a very low-flying object, otherwise the rays would be distributed equally around the impact point, as they are with Copernicus and Kepler (both of which you can see very clearly tonight). The exact same process that created the Tycho rays was duplicated closer to the eastern limb at the craters Proclus [H14] and Stevinus A and Furnerius A [N15], with nearly identical results. And here is a curious thing: the butterfly patterns around these four craters all indicate that the impactors came in from the west. Coincidence?

There is one jaw-dropping ray that appears to extend from Tycho all the way across Mare Serenitatis and keeps on going. There has been some speculation that this ray has merely been “renewed” by a ray from the crater Bessel [NE/G11] which it crosses. Patrick Moore (of Caldwell Object fame) finds this implausible, and it does seem unlikely that Bessel would produce only one solitary ray of such magnificence. 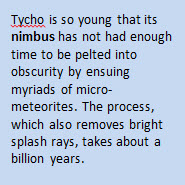 Tycho has another unusual feature that is brought out by the high Sun: Notice the nimbus, the dark collar that just encircles the rim. No other crater on the Moon has a surrounding nimbus that is so dark.

At a mere 109 million years, Tycho is the youngest of the large craters on the Moon. Although its northern cousin Copernicus is about 800 million years old, they are both considered “youngsters.” Notice how the rays emanating from Copernicus and Tycho have entirely different characters. Whereas the Tycho rays are clearly delineated, those from Copernicus are wispy, plume-like, and shorter. It is curious that this is so, particularly since Copernicus is the larger crater and was created by a more powerful explosion.

OF ADDITIONAL INTEREST FROM LUNAR DAY 15 THROUGH Day 21:

Mars is now starting to move away from its closest encounter with the Earth in two years, but there’s still some good viewing left, so catch it while you can!. During this week it will go from an apparent diameter of 17.4 arc-seconds to 16.8–so it will still provide good detail, and its most prominent feature, Syrtis Major, will have finally rotated into view and be visible all week (along with its polar ice cap). Saturn will also be close by and provide good views.

Tycho Crater: The Youngest of the Large Moon Craters and the Most Spectacular System of Rays on the Moon
Tagged on: lunar dates    objects on the moon