The week of June 27th – July 3rd takes us from lunar day 22 (last quarter) to the beginning of Day 29. On Monday the Moon does not rise until after midnight, so the entire week is for late night/early morning observers. This week we will highlight the crater Clavius. 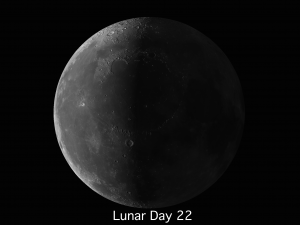 Clavius: [SW/Q8; L=14°W]
Sunset over Clavius is something that you don’t want to miss! The crater is so large (140 miles) that as the Suns sets, the curvature of the Moon keeps the floor’s central regions in the sunlight, although the surrounding mountains are dark. If you were an astronaut standing on this point, the Sun would be setting over a flat horizon–the rim mountains (some of them three miles high) would be below your line of sight! 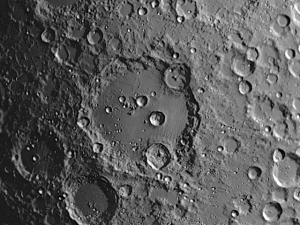 On Monday, the floor should still be in sunlight (the terminator will be at 8° W and Clavius is at 14° W) and you will see a floor that is strewn with craterlets. There is a delightful arc of small craters, artistically and sequentially arranged in order of size, which begins at Rutherfurd, the larger crater just inside the southeast rim, arcs northward and then diminishes toward the west. 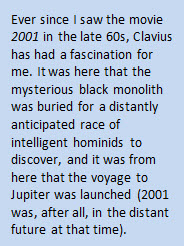 These craterlets provide an excellent tool for amateur astronomers to test the resolution of their telescopes. In order of diminishing size they are Rutherfurd (34 miles), Clavius D (16 miles), C (12 miles), N (8 miles), J (7 miles), and JA (5 miles). In addition, there are upwards of 30 even smaller craterlets contained within this arc. If you can see several of these, then you have excellent optics indeed!

While the Sun angle is low over Clavius, look for several ridges that extend like fingers northward from Rutherfurd. The origin of these ridges remains a mystery. Revisit Clavius often. You will always see something that you missed previously.

OF ADDITIONAL INTEREST ON LUNAR DAY 22 TO 29:

The Veil Nebula (NGC 6960) is a spectacular showpiece item which is visible as soon as it gets dark in Cygnus. You’ll need dark skies and an OIII filter, but almost any telescope with an OIII filter will let you see it. (There are even reports that you can see it with your naked eye with just an OIII filter!) The Veil is a supernova remnant which is still expanding from an explosion that occurred 5,000 to 8,000 years ago, so the early Egyptians may have seen it in their night sky (and possibly during the daytime, since it is twice as close as the Crab Nebula supernova which was visible for 23 days during the day and for two years in the nighttime sky!)

As you look upon the Veil Nebula, consider the fact that life on Earth, even the Earth itself, would not have existed without similar explosions nearby. The Big Bang created only two things: hydrogen and helium. All of the other elements in the periodic chart were created in the fires of a supernova explosion, which then scattered these elements throughout the universe to eventually coalesce into planets and the building blocks of life. We are, quite literally, children of the stars!

On Monday night put Mars and the globular cluster NGC 5897 in the same field of view (they are only 22.5 arc-minutes apart). Mars is in its apparent retrograde motion because the Earth, in its smaller orbit, has caught up to Mars and passed it. Observe Mars each night and notice how it gets about 30 arc-seconds closer each night to NGC 5897 until Thursday when it becomes stationary and then resumes its normal eastward motion. This apparent backward motion mystified scientists until Copernicus resolved the issue by placing the Sun at the center of planetary motion.