The week of December 10-16 takes us from Day 3 through Day 8. This week we will highlight the crater Fracastorius and Mare Nectaris, the Sea of Nectar, viewable on Wednesday night, and the Geminid meteor shower which will peak late Thursday night. 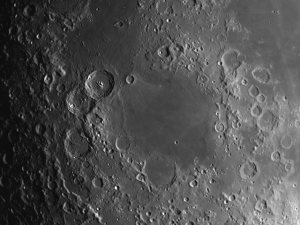 Mare Nectaris: [SE/L13] The Nectaris basin was excavated 3.9 billion years ago. The oldest features on the Moon formed prior to this event. Mare Nectaris is a classic example of a multi-ring basin. Wednesday or Thursday night will reveal the attendant Rupes Altai, a high cliff that is a conspicuous fragment of one of the original rings. As daylight moves across the region, try to locate hints of other ring features surrounding Mare Nectaris. 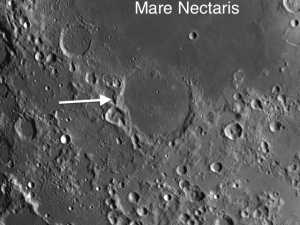 Fracastorius: [SE/M13] Located on the south shore of Mare Nectaris, this is one of the Moon’s best examples of subsidence. The Nectaris lavas were so heavy that the floor of Fracastorius actually cracked as it bent downward and allowed the Nectaris lavas to flow over its northern rim. If you’re lucky and have good optics and good seeing, you might actually glimpse the unnamed rille that crosses the floor from east to west just south of the center. There is a tiny 2.5-mi. crater right in the middle of this rille that may help you spot it. (Daguerre on the north shore [L13] and its adjoining unnamed neighbor have both fallen victim to the same process of subsidence.)

There are some quite small objects on the floor of Fracastorius requiring high quality optics and steady seeing. How many of these can you detect? Make a quick sketch, then come back later to compare.

OF ADDITIONAL INTEREST IN SPACE THE WEEK OF DECEMBER 10th:

The Geminid Meteor Shower will peak late Thursday might, 12/13. The greatest activity will be between midnight and dawn. Bundle up with something warm to drink and be patient. You should see a meteor every 1 to 2 minutes.

Great comet news! (Repeated from last week’s blog). The brightest comet this year is now in the skies, and it obligingly appears during the hours before midnight. Starting Tuesday Comet 46/P Wirtanen (“WERE-tuh-nun”) will move into the constellation Taurus and its closest approach will be on Sunday evening, Dec. 16. It is also the 20th closest comet in over 1,000 years and some predictions say it will reach a maximum brightness of mag. 2.5 around Dec 15th to 20th. However, the magnitude number may be a bit misleading because the comet is very large, ½° (the size of the full Moon), and the light from it is very diffuse. You will need an instrument with larger light gathering power than ordinary binoculars unless you’re under very dark skies. Unfortunately, a waxing Moon will be in the sky, heading for full moon on Dec. 22. But on Christmas you’ll have an hour or so to view the comet in Auriga before the Moon rises, and a moonless viewing window will keep increasing after that.

On Saturday evening the comet can be conveniently found passing almost midway between the Hyades and Pleiades star clusters, and on Dec. 22nd it will pass 2½° to the south of Capella. A week later, 46/P will be visible most of the night without any lunar interference, and about a half hour after the start of the New Year it will stand more than 70° above the northern horizon, and probably hover at around 4th magnitude.