The week of December 3-9 takes us from Day 26 to Day 2. Tuesday morning around 4:00 a.m. will be the only practical opportunity to view the Moon. This week we will highlight the crater Seleucus and Comet 46/P Wirtanen. 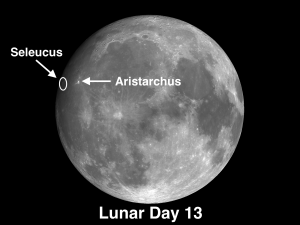 Seleucus: [NW/G3] Seleucus is an admirable little 27-mile crater sitting by itself on the Procellarum lava plains west of Aristarchus and Herodotus. It has a central bump aspiring to be a mountain, a sharply defined ejecta blanket, and terraced walls that rise to more than 10,000 feet.

On Thursday, Mars and Neptune will be 40° above the SSW horizon and only 20 arc-minutes apart, easily seen in the same field of view of a telescope with moderate magnification. Mars is to the SW of Neptune. Note its position, then come back the following night and notice how Mars has shifted to an equal distance on the other side of Neptune, but Neptune, being much farther away, has barely moved against the background stars.

Great comet news! The brightest comet this year is now in the skies, and it obligingly appears during the hours before midnight. Comet 46/P Wirtanen (“WERE-tuh-nun”) is now at 3.8 magnitude. It is very low in southeastern skies, in Eridanus, but will rise higher up throughout December. It is also the 20th closest approach of a comet in over 1,000 years and is predicted to reach a maximum brightness of mag. 2.5 around December 15th to 20th. Unfortunately, a bright waxing Moon will be in the sky, heading for full moon on December 22. But on Christmas, you’ll have an hour or so to view the comet in Auriga before the Moon rises, and a moonless viewing window will keep increasing after that.

On the evening of December 15th the comet can be conveniently found passing almost midway between the Hyades and Pleiades star clusters, and on Dec. 22nd it will pass 2½° to the south of Capella. A week later, 46/P will be visible most of the night without any lunar interference, and about a half hour after the start of the New Year it will stand more than 70° above the northern horizon, and probably hover at around 4th magnitude.

1Seleucus: (fl. 150 BCE) Seleucus of Selucia, the man after whom the crater was named, deserves to be better known. He was a Greek philosopher and astronomer who ardently defended the heliocentric theory proposed by Aristarchus of Samos 100 years earlier. Seleucus was also the last heliocentric defender until Copernicus! In spite of their many significant contributions, Aristotle, Ptolemy, and their powerful earth-centered ilk managed to set back the progress of astronomy for 1,500 years. Kenneth Davis reports in his book, Don’t Know Much About the Universe that the Catholic Church did not officially concede that the Earth revolved around the Sun until 1922!