The week of November 20-26 takes us from Day 2 through Day 7, 1st quarter Moon. This week we will highlight the craters Sabine & Ritter, viewable on Friday evening.

Sabine & Ritter: [NE/J11] About 60 miles west of the Apollo 11 landing site you will see two curious craters: Sabine and Ritter. They are unusual because they should be deeper than they are. Look closely at Sabine (the easternmost) and you will see that its shallow floor looks like it has been cut out by a giant cookie cutter. Both Sabine and Ritter are floor-fractured craters (FFC’s). 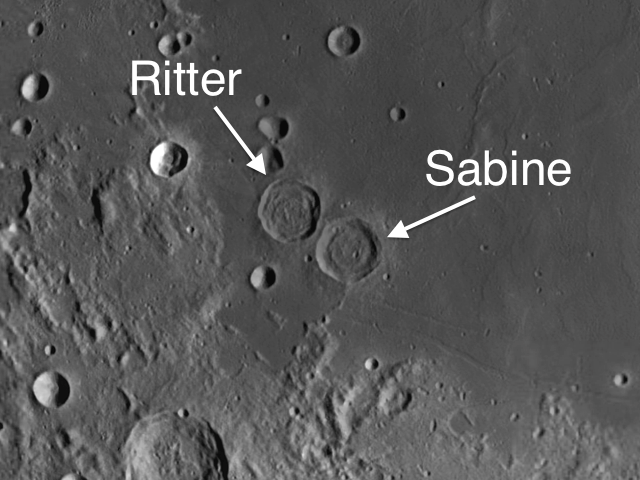 A floor-fractured crater is a special type of crater that has been modified by later volcanism, uplift, and consequent fracturing. Some of the common characteristics of FFC’s are that they are large, they have rilles (both arcuate and linear), they occur near the borders of maria, and (most significantly) they are very shallow for their size.

Floor-fractured craters have a fascinating genesis. Sometime after the crater was formed and had settled in, magma rising up from underneath the basin actually pushed the crater floors upward (hence their shallowness). It was not an effortless process and the resulting strain caused radial and concentric fractures to appear on the floor. At times, lava would also flow upward through these fractures and spill out onto the crater floor.