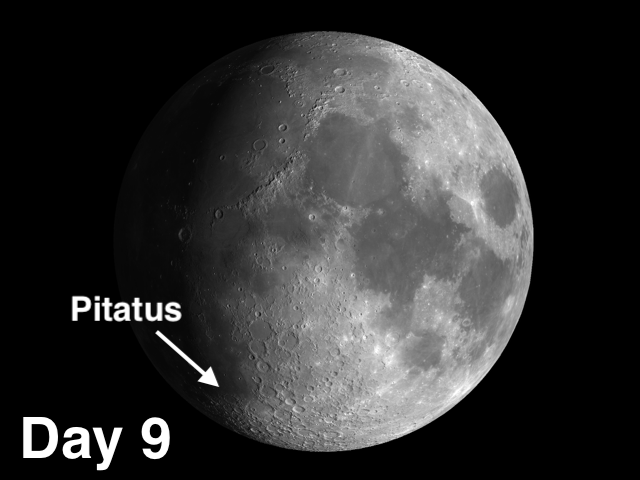 The week of November 27 – December 3rd takes us from the end of Day 8 to Day 15. This week we will highlight the crater Pitatus, visible on Monday night.

Pitatus: [SW/M8; L=14°W] For several reasons, Pitatus is one of my favorite craters. For one thing, it is one of the best examples of a floor-fractured crater (FFC) on the Moon. Notice how shallow the crater is, which is an indication that the entire floor had been lifted up by the pressure of underlying magma. Look for the telltale arcuate rilles around the inside perimeter – both are dependable signs that we have an FFC in our sights. Additionally, Pitatus has some very delicate features on its floor that will require a large aperture and steady seeing to resolve them.

If you can see some of the craterlets on the floor of Pitatus, keep observing them over the next several nights. They are secondary craters resulting from the formation of Tycho [Day 8; SW/P8], and will give you a look into why some rays appear discontinuous. The Tycho impact produced the most remarkable set of splash rays to be found on the Moon. Many of these rays are the result of lighter highland material being kicked up by secondary impacts from Tycho, not by Tycho itself. Such is the case here on the floor of Pitatus. Although rays become brighter (and craters tend to disappear) as the Sun rises, try to find a night when you can observe both craterlets and rays. With luck you will be able to see three lighter streaks pointing back to Tycho. Each streak begins at a cluster of small craters at the southern portion of Pitatus, the points of impact of debris that was blown in when Tycho was created.

I once made a cherry pie to celebrate my mom’s 94th birthday (she was born on George Washington’s birthday).1 When I took the pie out of the oven, I noticed something oddly familiar about it. There was a striking resemblance to the crater Pitatus. As a result of similar processes that had been at work in their formation, both crater and pie were, essentially, “floor fractured craters.” After the “lava” in both objects had cooled (in the case of the pie, it was hot butter and flour) the level of their floors dramatically shifted and arcuate cracks opened up as a result.2 There was even a group of slightly off-center hills in the pie. I combined the images of both crater and pie and sent it to Charles Wood of Sky and Telescope for possible publication on his LPOD website (Lunar Photo of the Day). My mom’s cherry pie actually made the big time and was published on LPOD for March 10, 2006. (Isn’t it remarkable, the things you can learn about astronomy in the kitchen!)

OF ADDITIONAL INTEREST IN SPACE THE WEEK OF NOVEMBER 27 – DECEMBER 3:

Saturday night’s full moon will be a “SuperMoon” (technically it occurs Sunday morning at 6:48 AM EST). Because the orbit of the Moon around the Earth is elliptical3, a few times a year the full Moon will coincide with its closest perigee4. As a result, it will appear 14% larger and 30% brighter. Find a clear view of the eastern horizon and be in place while the Moon is rising, rather than later when it might be technically closer to the earth but will appear smaller. When the Moon just clears the horizon, the standard illusion that the Moon is bigger will be combined with the fact that it really is bigger – a double whammy that can sometimes be a captivating sight!

1 I do hope someone is still telling their children the story about how George Washington chopped down his father’s cherry tree when he was a little boy.

2 To be precise, the rills that opened up in the crater were the result of uplift, those in the pie were caused by subsidence—both important lunar processes.

3 Kepler’s discovery of the three laws of planetary motion was a major step toward freeing us from the shackles imposed for centuries by Aristotle, Ptolemy, and the Church–all of whom insisted that planets must move in perfect circles.

4 The Moon will come to perigee once a month, but the perigee distance can vary by up to 8,700 miles, so having a full moon coincide with its closest perigee is something that’s worth paying a little attention to. The term “SuperMoon” was actually coined by the astrologer Richard Nolle in 1979 to describe either a full moon or a new moon which coincides with perigee. However, the astronomical community prefers the official but cumbersome term “perigee-syzygy” (probably out of an understandable reluctance to admit that, once in awhile, astrologers could have a point)–but “SuperMoon” is so much easier to say!

Latest posts by Andrew Planck (see all)
The Things You Can Learn about Astronomy in the Kitchen: Cherry Pie and #MoonCrater Pitatus
Tagged on: Charles Wood    lunar dates    lunar days    objects on the moon    Sky and Telescope    super moon