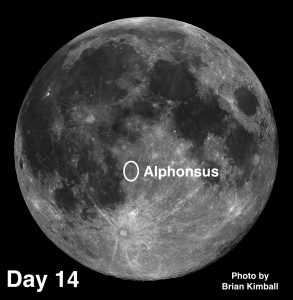 The week of May 28 – June 3 takes us from Day 14 (essentially full moon) through Day 19. This week we will highlight the craters Aristillus, Alphonsus, and Archimedes, visible on Monday – Wednesday.

Aristillus: [NE/F10] We were first introduced to Aristillus in a previous blog for Day 7 when its more complex features (ramparts, central mountain peaks, terraces, etc.) were conspicuous because of the low sun angle. Under a full Moon, we can now see that Aristillus is also at the center of a ray system, which means that the crater is less than a billion years old – a mere youngster in lunar terms! 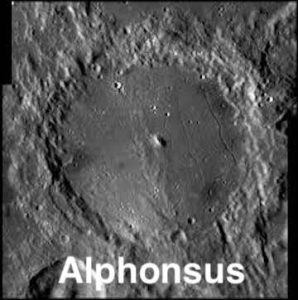 Archimedes: [NW/G9] Around full Moon Archimedes will sometimes display, however faintly, a series of bands running across its floor from southwest to northeast. Look closely and you might be able to see that the bands continue unbroken up the N.E. crater rim and onto the Imbrium floor beyond.

1 Pyroclastic Eruptions: A substance that is composed chiefly of rock fragments of volcanic origin is called pyroclastic (from two Greek words meaning broken by fire). On the Moon it refers to a little-known but fascinating phenomenon called explosive pyroclastic eruptions. As magma and molten rocks spewed out from volcanic vents, sometimes gases that were trapped within suddenly expanded and caused the rocks to explode in a shower of tiny dark glass beads. The result was that the area surrounding the source vent was covered by a dark halo of pyroclastic deposits. There are several areas on the Moon where you can see these deposits through backyard telescopes, but the crater Alphonsus is the best example. The Aristarchus Plateau [Day 11; NW/G4-5] is entirely covered with pyroclastic ash 30 – 100 feet thick. The Plateau has attracted the attention of NASA as an area for lunar colonization because hydrogen and oxygen can be extracted from the ash, providing fuel, water, and breathable air.