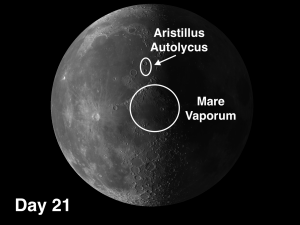 The week of June 4 – 10 takes us from Day 20 to Day 26. This week we will highlight Mare Vaporum and the craters Aristillus & Autolycus, visible early Tuesday morning.

Mare Vaporum: [NE/H10] Notice how there are finger-like projections extending from the back side of the Apennines into Mare Vaporum (the Sea of Vapors). It is not coincidental that these extensions point back to Mare Imbrium, as they are part of the ejecta that was thrown out during the initial impact. (This also makes the Sea of Vapors considerably younger than Mare Imbrium.)

Aristillus/Autolycus: [NE/F10] Last week under a full Moon you noticed that Aristillus was at the center of a ray system (which meant that the crater is less than a billion years old–a mere youngster in lunar terms!) Now that the Sun angle is lower, its more complex features (ramparts, a central collection of mountain peaks, terraces, etc.) become conspicuous. How many mountain peaks can you count?

An examination of the floors of Aristillus and its close neighbor to the south, Autolycus, will indicate that they formed after the lava flows that filled the Imbrium basin. If you are favored by good lighting, immediately to the north of Aristillus you will be able to make out the outlines of an unnamed ghost crater which was almost entirely submerged beneath the lava flows. Notice how ejected material from the Aristillus impact covers the southern portion of this spectral image. Can you make out an unusual dark band that travels up the northeast inner slope and disappears over the rim?

Mare Vaporum and the #MoonCraters Aristillus & Autolycus
Tagged on: lunar dates    lunar days    objects on the moon    sea of vapors