The week of April 4-10 takes us from Day 4 to Day 9. This week we will highlight the Triesnecker rilles on the moon and an object informally known as the “Lunar X.” 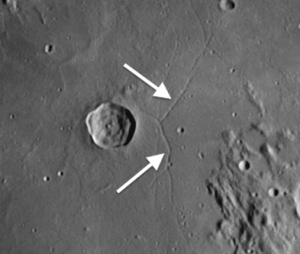 Triesnecker Rilles: [NE/J10] What a great place to poke around with your telescope! This is such a complex system of rilles that it looks like a railway switchyard! Which do you think came first, the crater or the rilles1?

Scientists are not sure how the Triesnecker rilles developed. Their origin still remains a mystery, but the consensus is they are not grabens (as the above Ariadaeus rille is). Enjoy them as one of the Moon’s many enigmas.

Lunar X: [SE/M10; L=1°E] Around 6 days 22 hours (depending on libration–you have to get this pretty exact, it’s a narrow window) as the terminator crosses the crater Blanchinus, the Sun will light up the mountain peaks immediately to the west of the crater and you will see a brilliantly lit “X” at the intersection of the rims of Blanchinus, La Caille, and Purbach. Look for it when the terminator is around 1°-2° east. Once it has formed, the image will last only for about three hours. The formation is also known as the Purbach Cross and the Werner X. (Because it is not an officially recognized object, you will not find it listed on the Field Map.)

1There is a rille approaching Triesnecker’s northeast rim that looks like it has been interrupted by the crater, suggesting that the rilles were there first.