The week of March 21-27 takes us from lunar Day 13 through Day 18. The week starts out with essentially a Full Moon in the sky. There will not be enough shadow contrast to see craters until Thursday, March 25th. In the meantime, enjoy the splendid ray systems emanating from Tycho and Proclus.

Last Monday we got to observe Jupiter’s moons Europa and Io as they transited across the face of Jupiter. Amazingly, the same double transit will happen again this Monday night, March 21st, just two hours later, and Jupiter will be only 2° north of the Moon.* You can observe these transits even with small telescopes. 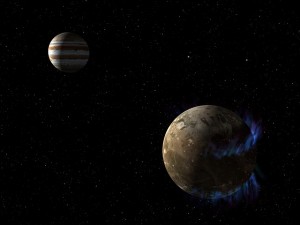 Europa will begin its transit at 11:42 PM EDT, followed by Io at 11:56. The moons will be difficult to make out as there’s not much contrast against Jupiter, but Europa’s shadow will appear as a clean black dot against Jupiter’s north equatorial belt after midnight at 12:16 AM EDT (this is essentially a solar eclipse on Jupiter). As soon as Europa’s shadow appears, try to make out the Great Red Spot which will have just been fully revealed below it on the south equatorial belt. Then at 12:22 AM EDT Io’s shadow will begin its transit.

As you watch Europa approach Jupiter, consider that you are looking at one of the most likely places in the Solar System where we will find evidence of extraterrestrial life (albeit pretty small). Europa is covered with oceans of water that are 90 miles deep! (Compare our deepest oceans which are only five miles deep.) Only the top mile or so is solid ice, the rest is liquid H2O because of the many undersea volcanoes. The combination of water + energy leads to the exciting possibility of at least microbial life having formed in Europa’s oceans. We should know one way or the other in the next few years.

If you haven’t downloaded the SkySafari app from iTunes yet, now is a good time to do so. Set it up for March 21st for whatever time corresponds to 11:42 EDT, do a search for Jupiter, click on “center,” then zoom in until Jupiter almost fills the screen. The detail is astonishing! Not only can you clearly see the cloud bands with their munutia of details, if you click on “Time,” choose “minutes” and put it on fast forward, you can observe all four transits move across Jupiter’s face on your iPhone screen!

*Io’s precise orbital period of 42h 28m 34s was used to calculate the speed of light as early as 1675, although it was an accidental discovery. The scientist Olaus Roemer had timed the orbit of Io and then six months later, when the Earth was on the opposite side of the Sun, he came back to observe Jupiter and calculated when Io should reappear from behind the planet. His calculations were off by 1,000 seconds and he realized that the only explanation was that it took light an additional 1,000 seconds to traverse the orbit of the Earth. As a result, he calculated the speed of light to be 141,000 miles per second—remarkably close considering that nobody had any idea that light had a finite speed (and the telescope had only been invented 75 years earlier!).

March 21-27: The Most Remarkable Set of Splash Rays to be Found on the Moon
Tagged on: lunar dates    objects on the moon